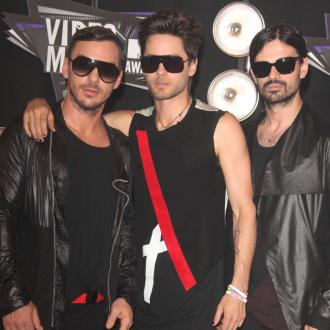 Shannon Leto has been arrested for Driving Under the Influence (DUI).

The Thirty Seconds to Mars drummer - the older brother of Jared Leto - was detained by police on Monday night (16.06.14) in Hollywood after he was allegedly found to be driving over the legal alcohol limit.

The 44-year-old musician also allegedly had an outstanding traffic warrant at the time for driving without a licence.

The rock star is currently in police custody on $5,000 bail as well as $2,500 for driving without a licence, according to TMZ.com.

Meanwhile, the band are expected to play a gig in Turin, Italy, on Thursday night (19.06.14) as part of their 'Love, Lust, Faith and Dreams' tour, but it is not yet known whether Shannon's arrest will force the show to be postponed.

The group - which is made up of Jared, Shannon and Tomo Milicevic - will then make their way around Europe throughout June and July, before heading to the US and kicking off the Carnivore tour with Linkin Park and AFL on August 8 in West Palm Beach, Florida.