Sam Fischer: Demi Lovato is one of the bravest people I know

Demi Lovato's duet partner Sam Fischer has opened up about writing deeply person track 'What Other People Say' with Demi Lovato and hailed the pop superstar "so brave" for opening up about her battles with mental health. 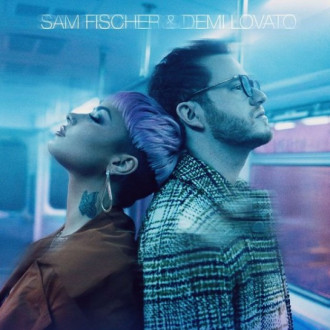 The pair have joined forces on the moving duet, 'What Other People Say', out later today (04.02.21), and the 29-year-old singer-songwriter has admitted it's admirable that the 28-year-old megastar has been open and honest about her battles with substance abuse and mental health through her music, because in sharing her own struggles she is helping “millions” of other people.

Sam told the Daily Star newspaper's Wired column: "It's a real gift for her to be able to share everything she's been through, because I Imagine every time she thinks about it and every time she talks about it, it hurts.

"But she is giving millions of people around the world a chance to not feel alone in their struggle.

"Demi's so brave - one of the bravest people I know - and she's so talented.

"Demi Lovato is one of the greatest vocalists in the world so to be able to sing with her is such a dream come true for me."

Sam has also been through his own battles and was broke and practically homeless for "a long time”, until his single 'This City' stormed the charts.

And the pair were able to offer two "different life perspectives" on the track.

He said: "Before 'This City' took off, it was kind of dark days.

"I didn't have any money and I didn't really have a place to live for a long time.

"Both of us have different life perspectives and our own struggles.

"She's been in the public eye since she was like eight years old and me being newer on the scene.

"It's really cool to be able to share this part of her story and give the fans more of her."

A press release stated that 'What Other People Say' is about the "feeling of being alone and not wanting to let people down".

Demi commented: “This song is a reflection on what it’s like to lose who you truly are in an effort to please other people and society. It’s why I wanted to make this song with Sam – ultimately it’s about two humans coming together to connect and find solutions to their problems.”

Sam said: "'What Other People Say' is a confession, realising how far away you can get from who you are in an effort to be liked. It’s about the pressures of society and how getting caught up with the wrong things can change you.”