Sam Fender has cancelled his two Glasgow Barrowlands concerts this week, due to half of his crew "coughing their guts up". 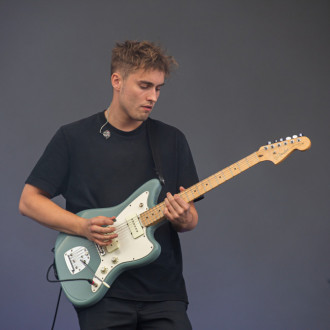 Sam Fender has postponed his Glasgow shows as "half" of his touring crew needs to be tested for COVID-19.

The 'Play God' rocker has revealed his Barrowlands concerts, which were due to take place tonight (07.09.21) and tomorrow evening, will no longer being going ahead, as they want to get everyone tested since they have been "coughing their guts up".

However, the 27-year-old singer-songwriter is hoping they will still be able to play the Scottish city's TRNSMT festival on Friday (10.09.21).

Sam announced on his Instagram Story: “Can’t believe I’m writing this but half of our touring party has been coughing their guts up – we’re going to do the right and responsible thing and get us all PCR tested.

“Sorry Glasgow – hopefully we get to make it up to you at TRNSMT."

The North Sheilds star also teased a new single is set to arrive this week.

The follow-up to his acclaimed 2019 debut 'Hypersonic Missiles' is a "coming of age story", and Sam has admitted he overcame his fear of writing about his personal life during the process, which ultimately made him "better" at penning tunes.

He told Hot Press magazine: "I'm really proud of it.

"I’m actually more proud of it than I am of my first one. Normally I write about things that are going on in the world – and as we all know, not much has been going on in the world for the last two years ... But nobody wants to hear about COVID-19 ever again – so I wasn’t going to write a song about COVID! The whole album became very personal. A lot of it’s about growing up and about the self-esteem issues that we carry through to adulthood, and how it affects our lives as adults. But it’s more of a triumph over that, and a coming of age story.

"I think I’ve got better at writing songs.

"With 'Hypersonic Missiles', I was still figuring things out, and I was quite terrified to write about my own life. The only time I ever did that was a song called ‘The Borders’ from the first album, and that became my favourite song off that record. And it became a fan favourite. ‘The Borders’ sort of unlocked the door for that kind of writing style and that’s where it all started. And I think I’ve been a lot more confident. I’ve learned a lot more and my team has learned a lot more. My producer is a better producer now. We’re all better musicians."