Rudimental feel very grateful to have their careers in music, but have worked hard for their success. 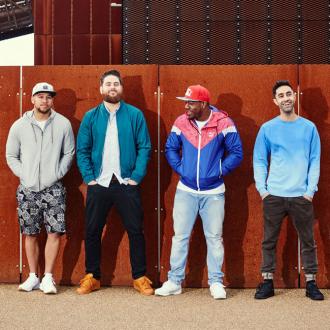 Rudimental say playing live is the best part of their career.

The British drum and bass group - comprised of Piers Agget, Amir Amor, Kesi Dryden and DJ Locksmith - love performing at festivals and their own shows as it has allowed them to achieve so much.

They said: ''We love playing live though that's one thing which has really pushed our career.''

And the 'Waiting All Night' hitmakers - who released their debut single 'Deep In The Valley' in 2011 - have admitted they have been ''ticking off'' a lot of collaborations with their idols, who they've always dreamed of working with, including George Clinton, Bobby Womack and Nile Rogers.

Speaking about the music legends they want to join forces with in the future, they said: ''A lot of them are dead.

''We managed to work on our last album with someone I really idolised as a young person. George Clinton from Parliament and Funkadelic and we actually got him on a couple of tracks. It was also amazing to work with Nile Rogers that was a lot of fun. Bobby Womack. We're ticking them off.''

Meanwhile, the foursome have admitted they feel ''blessed'' that they can live their dream making music and performing live rather than having everyday jobs.

Speaking to BANG Showbiz, they said: ''It's a blessing to be doing what we're doing, making an album rather than working in a supermarket or schools as we used to do.

''You've got to work really hard, we worked really hard for 10 years before we actually made it, believe in what you're doing.''