The actor says the stakes are raised higher than ever before.

Back in 2010, the world witnessed their first season of what would become one of the most talked about television shows of all time, as 'The Walking Dead' came to the small screen. Based on the popular Robert Kirkman comic book series of the same name, the show would bring characters from the pages of the books straight to television, making Andrew Lincoln a household name once more as he took the leading role of zombie apocalypse survivor, Rick Grimes. 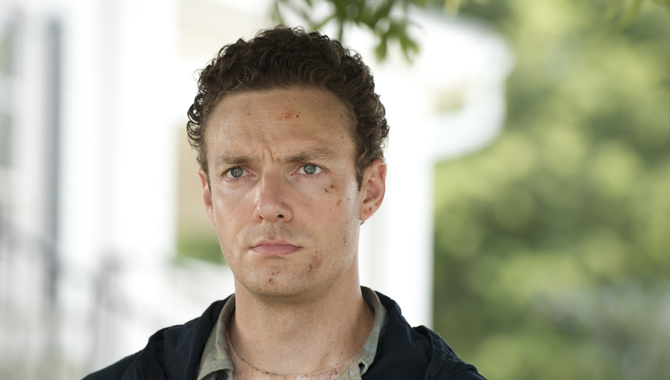 Ross Marquand stars as Aaron in 'The Walking Dead'

Now seven years and seven seasons later, the show has evolved in ways many of us could never have predicted. Deviating largely at times from the comic books, but staying loyal in many places where it really counts, the show is never afraid to throw a curveball in the viewers' direction, providing some of the most raucous and controversial storylines of the modern day.

Though the show is currently on a break from airing, production on an eighth season has of course been taking place, with the 'All Out War' story arc from the comic books said to be what will make up a huge section of that to come. As Rick and his fellow survivors band together in an attempt to take down the villainous Negan (Jeffrey Dean Morgan) and his group of 'Saviors', it's all but certain that sacrifices are going to have to be made if the 'heroes' of this story are to reclaim any sense of control.

Ahead of the eighth season, actor Ross Marquand who plays Rick's close comrade Aaron in the series has teased a little bit of what we should expect.

The actor continued: "I think it's so, so well crafted... Every episode I read I'm just blown away by what we're getting on the page and I think it is going to raise the stakes even higher than the show has ever gone before, which is saying a lot considering the stake rising we've been doing every single year for the last seven. To go even further in Season 8, that's just astonishing."

Hearing that Marquand is impressed with what's to come is certainly pleasing to the ear. What we must remember however is that he's somebody directly involved in the production of the new episodes; he was never going to say new scripts and storylines disappointed him, because he's a part of bringing them to fans.

Viewers will get to decide for themselves when the first part of Season 8 of 'The Walking Dead' arrives later this year.

'The Walking Dead' season 8 is expected to premiere later this year on AMC in the US and FOX in the UK.