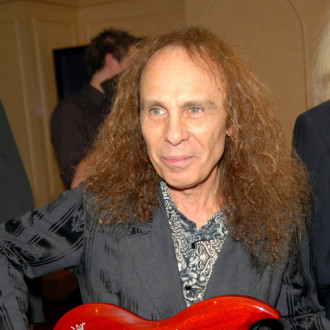 Ronnie James Dio's autobiography is set to be posthumously released in July.

The late heavy metal legend's long-awaited tome, 'Rainbow in the Dark', will finally be published, more than a decade after the singer-and-composer's passing in 2010 at the age of 67.

Dio had been working on his memoir before he died from stomach cancer 11 years ago.

Completed by British author and music journalist, Mick Wall, the Permuted Press book will come out on July 27.

'Rainbow in the Dark' will give fans an inside look at Dio's five decades in the music business as the bandleader of bands Elf, Rainbow, Black Sabbath and Heaven & Hell.

A press release states that the book documents “coming-of-age tales, glorious stories of excess, and candid recollections of what really happened backstage, at the hotel, in the studio, and back home behind closed doors far away from the road."

In 2020, it was announced that a tell-all documentary about Dio is in the works with Don Argott and Damian Fenton at the helm.

The seminal artist’s widow Wendy said at the time: “I am very excited to be working with BMG on Ronnie’s long-awaited documentary. Ronnie loved his fans and I hope they will enjoy this trip through Ronnie’s life.”

The film will include “never-before-seen archival footage and photos from his personal archives, plus “scenes with his closest peers, friends and family.”