Having been held back from being themselves as a "young queer weirdo", Robin Romo is now blossoming as a "sensitive Orchid"

Having recently released their latest single, Future Angel, Robin And The Goblins creative force Robin Romo is now looking forward to playing their "Victorian Synth-Pop" to a live audience. Robin Romo, a name adopted "after they started to identify as non-binary", likes to sit down, "dislikes speed", excessive contact with people, and finds "shareable content creation" tiresome. However Romo is certain of one thing, they are an artist, and an artist who finds compromise over creativity "a life or death affair". Ahead of upcoming dates in Berlin, at Madame Claude and Loophole on the 19th and 24th of November respectively, we caught up with the Spanish artist who describes themselves as a "sensitive little orchid". 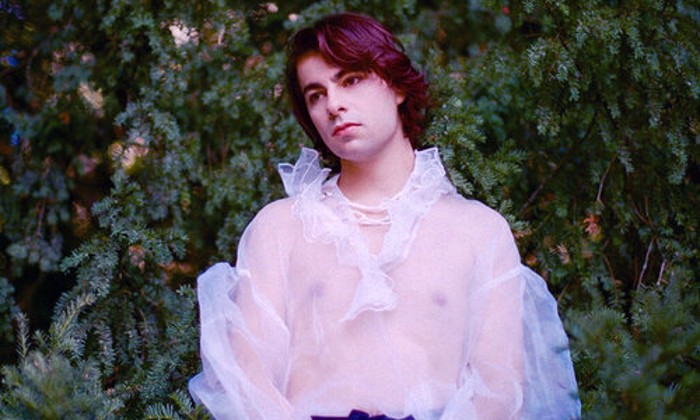 Baroque Pop, or songs of triumphant melancholy for feral faeries.

Something I did not see coming when I moved to Berlin to make music was the impending tyranny of content creation. It is expected of artists to constantly create short, "shareable" content, and if you don't then you're unambitious or lazy. It's important to remember that this system benefits people with certain qualities, and harms others. I'm not the first artist in history who dislikes speed, dystopian technology or excessive contact with people.

Another obstacle has been the amount of straight men in music, everywhere. For some time I went to gigs alone several nights a week to meet musicians and "industry people". I could not see how the fact that there were so few women and queer people in the live music scene was alienating, so I blamed myself for being "bad at networking". I didn't want to see gender and as soon as I started seeing it I got simultaneously angrier and happier.

Difficult, as I'm not the go-getter type and I'm a sensitive little orchid. The thing is, if you're an artist you just are. That doesn't mean you're a good artist, it just means you're useless at everything else! So in order not to be miserable, you have to find a way to make your art that works for yourself, and I'm still figuring that out.

My music is all about peeling the layers of social conditioning and allowing yourself to feel as intensely as you need to, becoming more oneself in the process...I didn't really get to do it as a young queer weirdo. That's why compromising when it comes to creativity feels like a life or death affair, as it opens ancient wounds. You can see how letting someone else make artistic choices would defeat the whole purpose...

The funny thing is, as strongly as I feel about this, I still have trouble telling others what I want. By "funny" I mean "frustrating", or "a natural consequence of LGBTQI+ people and women being brought up to deny their own instincts".

As a kid, I was a sensitive fairy with an overactive imagination, so when things started getting darker I created alternate worlds to process pain. I'm still doing the same thing with my own music, only now it costs more money. But when I feel sucked dry by modern life, I turn to  nonsense writers (Edward Lear, Edward Gorey, Lewis Carroll) or 80s fantasy movies like the Neverending Story or Legend. Anything that makes me feel that mixture of wonder and terror I love.

I would love to collaborate with artists like Arthuros or Castle Zagyx or Quest Master - people doing a genre called Dungeon Synth, which is reminiscent of fantasy movie and video game soundtracks.

My nipples get really hard when I eat spicy food. It's my body's way of telling me when something's spicy. Besides, you know, my taste buds.

My goals are creative rather than achievement-oriented. So I lie to myself and give myself some definitive aims just to put some fire under my ass and make sure I finish songs. Sometimes I feel extremely ambitious, sometimes I'd be happy living a country life, making jam and singing songs to my swans.

Around industry people, I feel this pressure...like people expect you to know your goals exactly or you're not worthy of their attention as a human being. They want to jump on a speeding train and see what's in it for them....but for me that's counter productive. We're so brainwashed to want certain types of success that it's natural to need time to figure that out for yourself. I still dream of singing on David Letterman and sitting on his lap though.

I hope to be sitting down, as that is by far my favourite position...but hopefully covered in bruises & tears after a full band gig - when performing live I am joined by the wonderful musicians Lidia Luciano (keys), Eszter Kádár (drums) and Sorcha Thompson (violin). By that time I'll have added some new songs to the setlist that I'm dying to perform live.

I'm releasing the lyric video for my latest single Future Angel, which I like to call Victorian synthpop. There's a haunting music video coming around Halloween, and in November I'll be playing in Berlin at Madame Claude (19th) and Loophole (24th). Come by if you're in town.