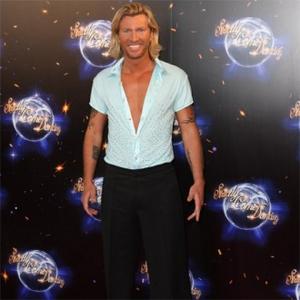 The retired footballer - who was voted off the BBC One show earlier this month - is pinning his hopes on either the McFly drummer or the 'Waterloo Road' actress taking home the glitterball trophy in this weekend's (17.12.11) grand final.

He exclusively told BANG Showbiz: "I want Harry or Chelsee to win the competition, they are just great dancers and they became close friends, as did Russell Grant.

"I'm looking forward to dancing in the final, we're all coming back for it."

The 37-year-old sportsman - who was partnered alongside Ola Jordan on the show - admits while he never considered himself to be a potential winner of the competition, he was "proud" of his achievements throughout the series.

He added: "I had a great experience on the show, it was great to dance with Ola but it was my turn to go out. I was proud with what I achieved. I won for myself. There wasn't really a point where I thought I could win it."

Robbie's stint on 'Strictly' has now led him to front his own football gaffes DVD, and he relished being given the opportunity to laugh at other players after being the "butt of everyone's jokes" for so long.

He explained: "It was great fun and really enjoyable to be on the other side of the camera because in the past I've been the butt of everyone's jokes on the football field. I've been smashed in the face by referees, tripped over, got fouled and kicked the ball at referees."