Priyanka Chopra Jonas wants to stay brunette for as long as possible. 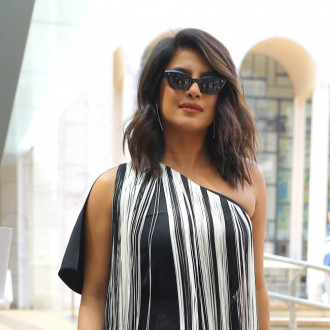 Priyanka Chopra Jonas would rather dye her hair than embrace the greys.

The 39-year-old actress - who is married to Nick Jonas - took part in a round of 'This or That' on her natural haircare brand Anomaly's Instagram page this week.

And she confessed that she isn't ready to let her silver locks show through just yet.

In the clip, the 'Baywatch' star swiftly headed for the "coverage" answer over the "embrace grey" option.

And the 'White Tiger' star also revealed that she prefers regular trims to an annual haircut.

The movie star launched her affordable brand Anomaly at Target earlier this year, and she explained that they used the likes of eucalyptus and rosemary in their formulas because it was "very crucial" for her to use what "nature has provided us with".

She said: "India definitely uses plants and a lot of natural beauty. This is why we have eucalyptus, charcoal, and rosemary in the formulas. We've used a lot of natural product within the line that provide nourishment to your hair. It was very crucial to me to incorporate the natural elements that nature has provided us."

Anomaly also prides itself on being sustainable and Priyanka shared how they blew most of their budget on making "superior formulas" over the packaging, but still managed to achieve a "beautiful" looking product.

She added: "It was really important for me to actually say "100% plastic trash" on the bottles because we're so proud to say it was made from trash. I knew it was going to be a huge part of the messaging, but it's also highlighting the fact that even though we used recycled plastic trash, the bottles still look beautiful and stand out in the haircare aisle because they don't scream gender or labels. The bottle caps actually only cost three cents to make. Because we spent so little on the packaging, we had a massive budget to focus on creating superior formulas."