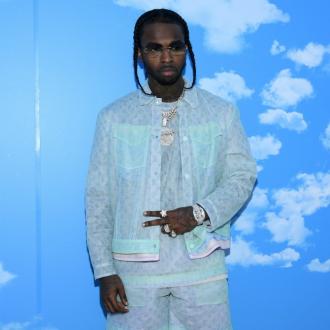 Pop Smoke's posthumous debut album will be released on June 12.

Steven Victor, the boss of record label Victor Victor, has shared the artwork for the late star's record on Instagram and confirmed its release date.

The announcement comes shortly after 50 Cent, who is executive producing the LP, which the rapper started before he was shot dead during a home invasion in February, insisted they were on track to finish it on time.

He said: ''We're definitely going to make the date. I definitely want to get Roddy Rich and a few of the people that I know that would fit on these records organically involved in it.

''I'm going it to send to them and I'm going to say, 'Play it. Listen, if you don't just feel like this is it, don't even touch it.

''Please send it back. Delete, and just move on.'

''Because he had so many pieces set up that were so good that it's not tough to put it together.''

The 'In Da Club' hitmaker reached out to the likes of Drake and Roddy Ricch to get them involved.

Alongside two snaps of himself outside and inside his private jet, the rapper - whose real name is Curtis James Jackson III - wrote on Instagram: ''i'm on the move listening to Pop smoke, i decided i'm gonna executive produce and finish his album for him.#abcforlife #starzgettheapp #lecheminduroi #bransoncognac (sic)''

And in a separate post he shared a picture of himself and Roddy, and added in the caption: ''Tell @roddyricch i'm looking for him, i need him on Pop album. #lecheminduroi #bransoncognac #abcforlife #starzgettheapp (sic)''

Roddy then responded with the shaking hand emoji and said: ''Say less.''

Curtis then followed up the post and this time tagged 'God's Plan' hitmaker Drake.

He wrote: ''see i got @roddyricch on deck, this s*** gonna be stupid @champagnepapi where you at *****, don't start acting light skinned on us. #abcforlife #starzgettheapp #lecheminduroi #bransoncognac (sic)''

Just days before his death, Pop had released the mixtape 'Meet the Woo 2'.

Meanwhile, his manager Steve revealed a documentary started by the rising Brooklyn drill star, who was just 20 when he passed away, is on the way.