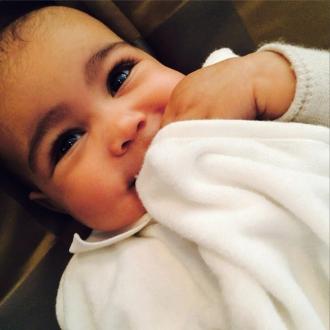 North West has been named an unconventional style icon in the CR Fashion Book.

The 13-month-old daughter of rapper Kanye West and reality TV star Kim Kardashian West has been photographed for the latest edition of former Vogue Paris editor Carine Roitfeld's magazine in a spread devoted to the 'Legends' of the fashion world.

The toddler - who was shot for the feature by famed photographer Michael Avedon - is pictured sporting a Chanel cashmere sweater and miniature studded handbag, along with the brand's signature pearl earrings and is labelled a ''future'' fashion legend, reports Telegraph.co.uk.

Karl Lagerfeld - Chanel's creative director - is quoted next to the tot as saying: ''It's never too early to care about fashion!''

It isn't the first time North has appeared in the pages of one of the world's fashion bibles after the youngster made her magazine debut in a spread for US Vogue along with her famous parents in April this year.

North is joined in the 'Legends' feature by fashion designers Stephen Burrows and Bob Mackie and the late photographer Bob Richardson.