Mumford & Sons' Marcus Mumford joked that playing at the Apple Music Festival last night (27.09.15) was like Reading and Leeds Festivals but with less ''vomit and unprotected sex''. 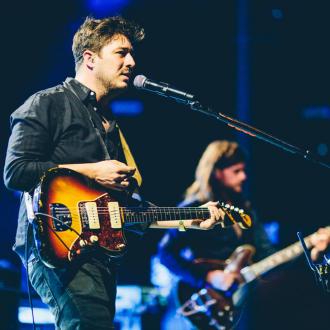 Mumford & Sons joked that the Apple Music Festival was like Reading and Leeds Festivals but with less ''vomit and unprotected sex''.

Frontman Marcus Mumford spoke of the band's excitement at being back in their hometown as they took to the stage at the Roundhouse in London last night (27.09.15) and admitted they've loved playing more shows in the UK recently but that Reading and Leeds Festivals were slightly less civilised.

Comparing the gig to their appearances at Reading and Leeds in August, he added: ''There was a lot more vomit and unprotected sex. I think I prefer ... Oh I don't know.''

However, the bands' Ben Lovett was clearly keen to get the crowd involved as he encouraged fans to ''get up and dance and throw things''.

In addition to their hit songs 'I Will Wait', 'Little Lion Man' and 'Believe', Mumford & Sons also performed an entirely acoustic version of their track 'Cold Arms' as they unplugged their microphones and instruments and sang the lyrics accompanied only by Marcus' acoustic guitar.

The penultimate night of the annual music event - formerly known as the iTunes festival - also saw the band bring opening act Jack Garratt back on stage for a cover of Eurythmics' 'Sweet Dreams'.

Introducing the 23-year-old musician, Marcus said: ''He's going to rule the world and we're very happy about that.''

Other artists who have appeared at the venue in Camden over the last week include One Direction, The Chemical Brothers and Pharrell Williams while Florence and the Machine are set to take to the stage after opening act James Bay tonight (28.09.15).