Indie-Americana four-piece Mipso embark on an exciting UK and European tour this month, just weeks after releasing their incredible new single 'People Change' via AntiFragile. If you love the likes of Local Natives, Fleet Foxes and Bon Iver as much as we do, you'll love these folk-tinged musings. 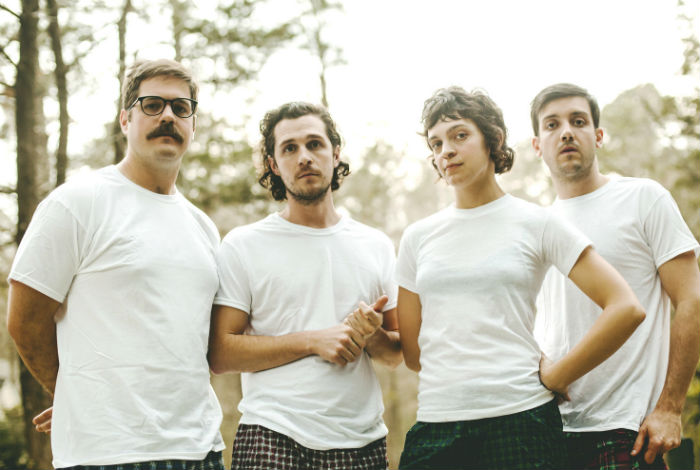 I would say the best course of action for those who are curious about our music would be to listen to it, as I (like most musicians I know) feel inadequate to the task of summarizing it. I can tell you that when we started out, we were all playing exclusively acoustic instruments and we loved singing together. Several of us happened to be getting interested in the history of bluegrass and string band music, more from an intellectual perspective than necessarily wanting to become a bluegrass band. We've always written pop songs, essentially, but the influence of those fiddle tunes and old ballads we were learning certainly crept in. As we continued making music, we got broader with our instrumental palette, and we opened up our live shows to more space and improvisation without constant "soloing." We try to write songs that have their own rich emotional lives and to arrange them and play them in a way that illuminates those lives.

The big challenge we have is not very unique: we have to be on the road so much in order to make a living from music making that it sometimes feels like we don't have lives outside of our work. That is particularly tough because the alternative revenue streams-song placements in commercials, for example-feel like a bit of a distraction from music-making, if they become a large part of your focus.

And then there are problems of image or perception... for example, it has been a challenge at times to convince people we can play certain types of gigs, partly because people have preconceptions about a band that has a fiddle and mandolin in it. For some people we're too sweet and soft to hold a festival audience; for others we're too fun to play a quiet songwriter venue. But again that stuff, while it may affect your week-to-week strategic discussions, shouldn't make it onto the creative radar.

I would say we've already made more of a name for ourselves than we ever imagined when we started out. I remember playing our first show in Europe, a tiny little bar in Halden, Norway, and there were about 10 people there. But a couple of them had driven two hours to see us and had played one of our songs at their wedding. That was really unbelievable to me, and also pretty strange. This career is probably very, very difficult if you start out with expectations beyond having two people across the world drive two hours to come hear you play.

It is essential that we have creative control. I can't imagine doing it any other way, or what the point of that would even be. If you make music under somebody else's orders, you can't even enjoy success if you happen to stumble upon it. And besides that, making music-making the music you want to make, as best you can make it-is its own reward.

From all over the place! From looking out the window as we drive down Interstate 95, objectively one of the most soulless corridors ever traveled by humankind. From heartbreak and lovesickness, obviously. From Raymond Chandler novels and trying to keep house plants alive and hangovers. As far as music we feel inspired by, that answer would vary band member to band member and day to day, but I'll say some I'm feeling at this moment: Wilco, the Carter Family, Dan Reeder, Joanna Newsom, Joni Mitchell, The Weather Station, Buck Meek, Tatiana Hargreaves, Arthur Russell, Bob Dylan, Jake Xerxes Fussell, The Kossoy Sisters, Anais Mitchell, Randy Newman, John Hartford, Bob Wills, Henry Flynt. I love a lot of fiddle music from all over the world, too-Cajun, Celtic, this Huasteca stuff from Northeastern Mexico my friend Jake showed me that is fiercely beautiful, old time from states across the U.S.

Yeesh that's tough to say. Maybe Randy Newman because I'm a sucker for big orchestral arrangements and I would love to be a part of Toy Story 5.

One member of our band has a third nipple.

Just to keep doing it and not to lose the love of it. I think it might be counter-productive to get too specific about that, contrary to the current prevailing beliefs in self-help.

Next week we're going to California and we're playing a wedding in Sonoma County so probably some half wine-drunk Instagram posts. We're also wrapping up a new album next month so expect some very spicy singles.