We're loving a darker sound this month to contrast the brightening weather, and Glasgow's Michael Timmons is just the ticket with his angsty new song The Games Room. He released his debut album Bone Coloured last year and recently supported The Twilight Sad on tour. He'll perform a headline show at King Tut's on April 20 2019. 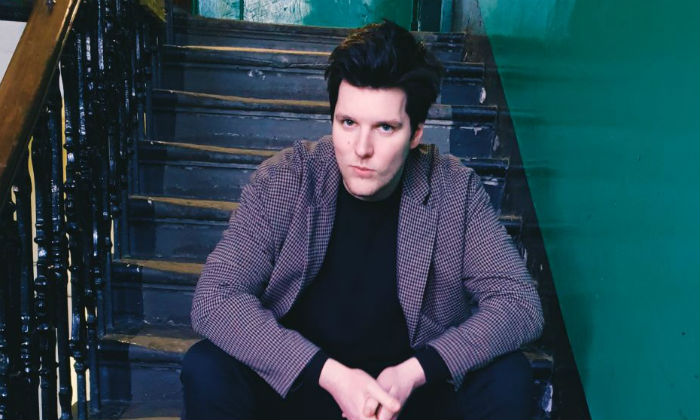 I usually describe my music as pretty miserable but lyrically lots of hopefulness in there too. My songs are all quite personal, narrative driven and the sound usually very stripped back, intimate with just my voice and electric guitar and usually a bit of etherealness in there too.

The most challenging thing first off was actually being brave enough to just put my songs out there as my music can be very personal. The other challenge has been getting my music to the right people. There are so many musicians out there and so much good music too, it's hard to make yours stand out. But getting the opportunity to tour, supporting The Twilight Sad helped enormously. I released my debut album in Feb 2018 and then toured with them in November 2018, so although my album was almost a year old by the time I toured, it was very new to lots of people who suddenly started listening and buying the record.

It's pretty difficult to 'make it' I'd say but I no longer focus on that and I feel very lucky over the past year to have had the chance to do so many nice things with my music that I've never had the chance to do before like releasing my first album, the European Tour with The Twilight Sad, playing Celtic Connections in Glasgow and on April 20th playing my own headline show at King Tuts in Glasgow.

Feel very grateful for these opportunities and everyone who has bought a record and taken the time to get in touch to tell me what they thought of it.

My songs are all very personal. I process a lot of what I'm going through or have been through in my songwriting, so it's important that I have control over what I'm putting out there. But I've worked with some excellent producers and great people Andy Miller (Mogwai, Songs Ohia, Arab Strap, De Rosa) and more recently for The Games Room, Andy Monaghan (Frightened Rabbit).

I draw from my own personal experiences most often for my music. The Games Room is all about my experience of grief and written about the passing of my father just over a year ago. I find writing and sharing through my music helps me process things.

Having been a big fan of The Twilight Sad and getting the chance to tour with them I'd love to work on something one day with them.

I'm from a big family with three brothers and three sisters. Think my parents were hoping for some kind of musical family group - having watched Sound of Music too many times.

On the second day of the European tour last year, I was doing a bit of the driving, my first time driving in Europe, going ab out 2 miles per hour I managed to crash the van into a pillar. Luckily only a few bad scratches on the van.

I take things one step at a time at the minute, my aim for this year was to have a bigger headline show in Glasgow and release my second album. With my King Tut's show booked for the 20th of April, I now just need to get album sorted.

I hope my music will have reached a few more people. Or sitting here with my internationally renowned, multi-million copy selling platinum second album that's been number one in the charts for an entire a year.

I'm building up to my first every headline show at King Tut's Wah Wah Hut in Glasgow which is on the 20th of April. I've played in the venue so many times through the years supporting lots of great acts so it's brilliant to have my own show there. So that's my main focus.