Michael Jackson lives in Vegas through this slot machine

How Michael Jackson was immortalized in the casino world.

For decades, Michael Jackson entertained the world with upbeat and heartfelt music. Starting as a child in the Jackson 5, Michael was instantly the stand-out of the group and quickly ventured out as a solo artist. Known as the King of Pop, Michael Jackson was a beloved part of the music industry for many years and the impact of his death in June 2009 was felt by the world. The singer is remembered in many ways, but most importantly, through his music. The icon lives on in Las Vegas and online as there are many slot games players can enjoy that feature his top hits. 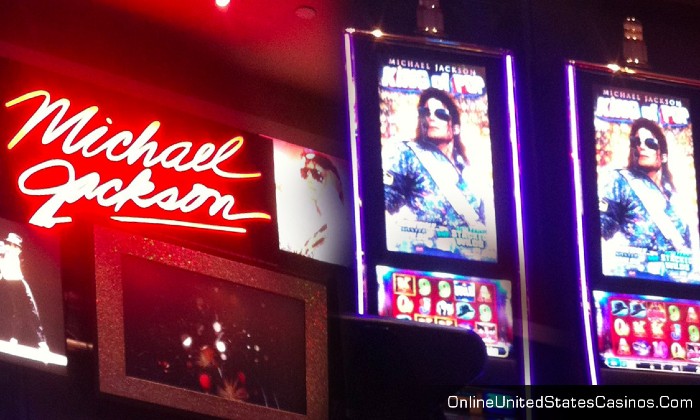 Fans of the artist often flock to a Michael Jackson slot machine when gambling, be it online or in Las Vegas. The themed games are not only fun but give back a piece of Michael that has felt lost since his passing. The slot games feature the most popular titles by the singer and are fun to sing along with while spinning the reels.

When it comes to online gambling, there is one Michael Jackson slot machine that reigns supreme. The King of Pop slot features Michael's style, music, and dancing. Created by Bally Technologies, this game captures the spirit of the superstar on the reels.

The game includes standard slot symbols such as the nine, 10, King, Queen, Jack, and Ace. They are glittering, just as one would expect with a Michael Jackson game. For higher paying symbols on the reels, watch out for the Rhinestone White Glove, Aviator Sunglasses, a Black Fedora Hat, and the famous Jeweled Socks tucked into loafers worn by the superstar.

The game includes wild symbols that can be wild, offer a Double Wild Bonus, and a Double Wild Jackpot. The Bonus symbol is actually an image of Michael from his popular Dangerous tour.

If you are looking for an online slot game that truly showcases the King of Pop, this is it. It is one of many trusted real money slots players enjoy when looking for themed content. The title is one of the Michael Jackson free slots to enjoy by simply playing in demo mode. Get to know the game by practicing before playing in real money mode.

Where else would you expect to find a Michael Jackson slot game than glittering Las Vegas? The city offers a nice selection of options if you know where to look. By learning how to play the Michael Jackson slot machine in Vegas, you can access fun and exciting entertainment while you are in Sin City!

One example of a Michael Jackson themed slot game can be found at the Venetian and the Cosmopolitan. The game is titled Michael Jackson Wanna Be Startin' Somethin' after the popular song of the same name. Sing along while you spin, watching out for the Startin' Somethin' Bonus Spin as well as a Free Games feature, Pick Bonuses, and the Leaning Wilds. The game is quite interactive and offers an amazing soundtrack you will want to sing and dance to.

So, what about wins? What can you do to learn how to win the Michael Jackson slot machine jackpot prize? There is no set strategy to win at this slot game. Sit down and have a budget in mind. If your budget is low, then play at the lower limits. Try to spend a certain length of time at the game, such as 30 minutes. Over time, you will hopefully trigger a large combination to win a big prize!

There are several casinos with the Michael Jackson slot machine on the gaming floor in Las Vegas. At the Mandalay Bay, the Michael Jackson Icon game is popular among the crowd. The game offers bright and colorful graphics and features the King of Pop at the top of the grid. High above the standard grid is a wheel that shows the big prizes players can earn when spinning the reels!

These are just a few examples of Michael Jackson themed slot games you will find online and in Las Vegas.