Mexican Radio talk making a name for themselves, the power of Berlin and kissing Mark E. Smith [Exclusive]

With their second album release 'Destruction/Reconstruction' imminent, we spoke to Dyan Valdes, the vocalist and synth-player of Germany-based punk trio Mexican Radio, about their experience in the music industry and the aesthetic that they have developed. 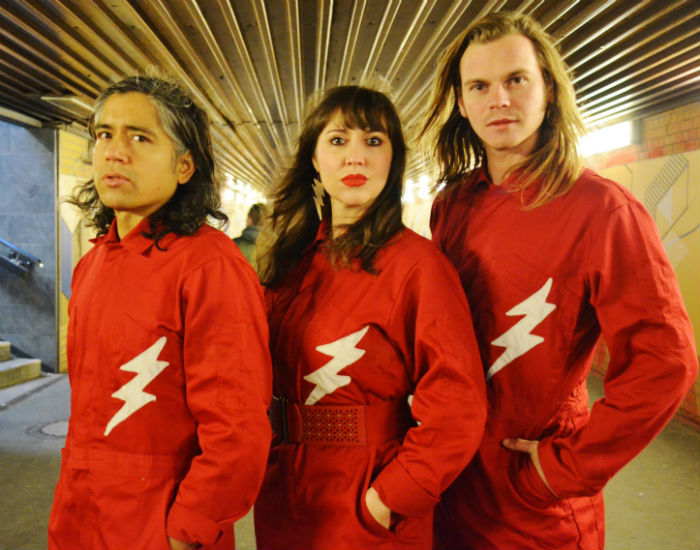 We are a synth-punk three-piece with high-energy songs about literature, art and history. We wear brightly-coloured uniforms at all times, and our live shows come across like psychotic radio broadcasts from another planet - a relentless onslaught of sinister yet danceable grooves.

All of us have been playing in bands for many years. Nathaniel (vocals/synths/effects) and I were in an indie band called The Blood Arm for over a decade, enjoying some success and also navigating the typical ups and downs of an independent band trying to survive and thrive in the digital age. Hannes (drums/vocals) has played in various rock and surf bands around Berlin for years, and is also very familiar with the uphill battle of trying to get your music heard and your shows booked. I think because we already have a bit of a rollercoaster experience of working with traditional record labels under our belts, we've felt much more free this time around to do more things ourselves and take more risks. I certainly feel a lot less naive about "the industry" and more confident in my own abilities and my right to be here. For that reason, we've just unapologetically done everything exactly the way we want to - recorded live to analogue tape, created our own quirky live show, sang songs about unconventional and uncomfortable topics, released our records on our own label, and so on. I think it comes across in the music that we are making no compromises, and even if it means more work for us, we are happier with the result.

Music streaming has been a real double-edged sword for musicians. On one hand, you can be heard anywhere in the world by anyone. On the other hand, because it is so easy to release your music digitally, the internet has become so incredibly oversaturated with music and it is hard to stand out in the crowd. However, I'd like to think that the people doing something truly original who are also willing to put in the hours get noticed eventually.

Being able to make the music we want to exactly the way we want to is essential to us. From the beginning, we made quite a few choices that are pretty unconventional - we don't play guitars, we sing songs about books and art, we wear uniforms at all times - the bolder, the better. It's not meant to appeal to everyone, so I think the people it does appeal to really appreciate how uncompromising we are.

Berlin is very much baked into our DNA as a band. The city has been an incredibly fertile artistic ground for decades - it is full of creative people. When Nathaniel (vocals/synths/effects) and I first moved here 9 years ago, I was eager to follow in the footsteps of other musicians who have come here to find inspiration - David Bowie, Iggy Pop, Nick Cave, etc. However in the last few years, I've been discovering more and more of Berlin's homegrown musical history. Bands like Malaria!, Ideal and of course Einst_rzende Neubauten came out of 1980s West Berlin, and have been hugely influential for us as a band. And the city's tradition of fostering innovative music continues today - punk and rock venues like SO36, Kirche von Unten, and Schokoladen give space to all kinds of emerging talent. The city's countercultural DIY aesthetic encourages everyone to work together and get involved in each others' projects - the goal is not commercial, but rather to create something interesting and inspiring.

Marina Abramovic. She has consistently pushed herself and her art to the limits of human endurance, pain and originality, and I can't think of a more interesting or vital artist working in any field. As a creative person and a performer, I think I could learn a great deal from her methodology and wisdom, so I would love at some point to take part in one of her workshops. Or even just sit across from her and silently lock eyes, if she ever repeats her monumental work "The Artist is Present."

Mexican Radio started as a German-language Fall cover band called Der Sturz, and we all consider ourselves to be fairly high-level Fall obsessives. Their relentlessly repetitive music and unapologetically brash vocals have had a huge impact on our sound, and Mark E. Smith's unyielding abrasive ethos of total commitment to living and breathing his work is something we hugely admire. The three of us went on a band field trip to see what would become The Fall's final Berlin show at the legendary punk venue SO36. Nathaniel and Hannes rushed onto the stage and went on either side of Mark E. Smith and both kissed him on the cheek. I tried my best to photograph the incident, but I was so excited that it came out very blurry. I think there is video of it somewhere on the internet.

We write very quickly, so I'm sure we'll be deep into our third record in a year's time. The first album Mexican Radio (March 2018) was our "white" album, Destruction / Reconstruction (coming out September 2019) is our "red" album, so the next one will be the "black" album. As such, we expect it to be even darker and more sinister than its predecessors.

We want to tour a lot to support the release of Destruction / Reconstruction over the next few months, hopefully making it to other European countries and the UK. We host a monthly radio show on KCRW Berlin called "The Mexican Radio Radio Show," and we've got quite a few exciting guests lined up for the next several episodes - between the radio show and promoting the album, you'll be hearing a lot from us!