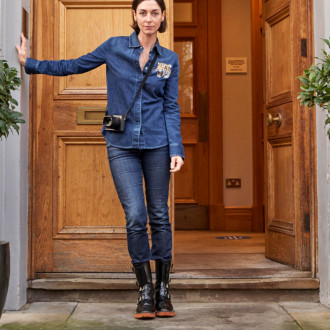 Mary McCartney is set to direct 'If These Walls Could Sing’, an upcoming documentary about Abbey Road Studios.

The Beatles are synonymous with the iconic recording space in St John’s Wood, London, which was renamed in 1970 from EMI to the same name as the 'Let It Be' group's 1969 album, 'Abbey Road’, which they recorded there.

And so it's only fitting that Sir Paul McCartney's daughter, a renowned filmmaker and photographer, would helm the upcoming film from Mercury Studios, a new music-first content studio from Universal Music Group, which is set to reveal all of the "untold" secrets of the legendary recording space, which first opened back in 1931.

The feature-length documentary will be produced by Academy Award-winner John Battsek, who has struck a deal with Mercury Studios and his own Ventureland.

Mary, 51 - whose mother is the late Linda McCartney, Paul's first wife - said in a press release: “Some of my earliest memories as a young child come from time spent at Abbey Road. I’ve long wanted to tell the story of this historic place and I couldn’t be collaborating with a better team than John and Mercury Studios to make this creative ambition a reality.”

Alice commented: “Mercury Studios could not be partnering with a more visionary and passionate team than Mary McCartney and John Battsek to tell Abbey Road Studios’ incredible story on film for the first time. We are passionate about showcasing work of pioneering film makers of the highest quality – which is why we are delighted Mary is bringing her creative vision to this project.”

Isabel Garvey, Managing Director of Abbey Road Studios, said: “If these walls could sing. I have lost count how many times I’ve heard that said at Abbey Road Studios over the years. I can’t wait for some of these stories to finally come to life in what will become a timeless documentary.”

'If These Walls Could Sing' will be released to mark the 90th anniversary of Abbey Road, then-EMI, opening its doors in November.

As per a press release: "It will tell countless stories featuring an all-star cast of interviews, unparalleled access to the studios and, of course, a spellbinding soundtrack."

Paul, 78, and his bandmates, Sir Ringo Starr, 80, and the late John Lennon and George Harrison, famously made Studio Two at Abbey Road their home, as The Fab Four recorded much of their back catalogue there between 1962 and 1970.