Darkwave quartet from York Mary and the Ram have us giggling non-stop in our recent interview where they obsess over Nine Inch Nails' Trent Reznor, explain the importance of not chasing fame and divulge their unusual inspirations behind the music. Although we resent their opinion of goth festivals (Infest FTW!), this is a band you don't want to miss... 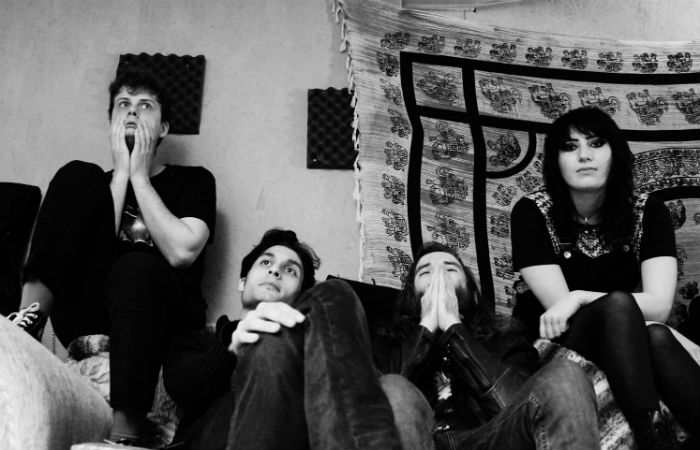 I think it's just navigating the waves, man. We'll find our place though. For us, whether five or five hundred people listen, that's better than nobody, but we've got some big plans. We have creative freedom, a s**t-tonne of drive, and a label [Syndicol] that gets behind us. In many ways, we are living the dream. We love the work we do outside of this too, so that's an added bonus, really.

Again, we try not to focus on that. What's the point? There are so many great bands out there, and artists. If we can be someone's loved band for minutes, or hours or on their playlists, then to me at least, that's pretty f***ing cool.

Well, Kiran [Tanna, vocals and production] is a massive control freak, so I think it's pretty important. He wants to believe he's Trent Reznor or something, he's even got leather pants, and I am unsure if he ever removes them. Errrr, what was the question again?  Oh, yeah, dude. If we were making thousands we'd lose creative freedom, at least in part, and are we willing to sacrifice that as creatives? F**k no.

We are also inspired by Kiran's cat. We dig The Paint Shop rehearsal space behind The Adelphi Club in Hull, in all of its bohemian glory. We love 90s alternative rock, and I f***ing refuse to believe it's not 1994. Spoken word. Post-punk. Goth culture, though we will never, ever play a goth festival. Unless there's loads of money involved, then I'll get my skirt, corset and nail varnish out again and pretend to play my instrument to a backing track any time. Oh, oh! Just because I can't cope without her, my housemate, Taryn [Blackden] who's also an insane musician, for her musical ears and advice, and just generally coping with my manic nature.

I'll give you zero guesses and just tell you. It's got to be Trent Reznor. Marilyn Manson before he gave up. Erm, my housemate Taryn. Officers (the band), but we are doing a remix with them. Adam Ant, because y'know 80s pop is amazing. Sarah Shiels and Eddie Logie, but they are in our live band, and I'm so excited that they give enough of a s**t to jam with us. Jon Harris (Sunna), maybe Charlie [our Syndicol label man] can hook that up? Stew Baxter from LIFE (because he's an absolute creative typhoon), and there are loads more... but I'll get on with this. Just let me have a sip of tea.

I co-host a wrestling podcast called Gimme A Hull Yeah! And since you asked, I also work on a mental health and disability awareness platform called Wobbling About and Rocking Out. Bonus content right there, Contact. Boom!

Maybe in a full live band, with full live band songs! Maybe we'll have played a show with one of these amazing bands: Bone Cult, Birthmarks, A Void, Witch Of The East, Modern Mood Swings, Rivers Johansson, The Parasitic Twins, The Nightmare Generator, Manscreams, Snakerattlers, Bloodhound, The Black Lagoons, Smiling Assassin, Berlin Black... errrr, I dunno, Have A Nice Life (just because I love them so much right now), but I can dream.

I'll probably just be sitting here, with no band, waiting for my tickets We Are So Goth We S**t Bats Festival 2020.