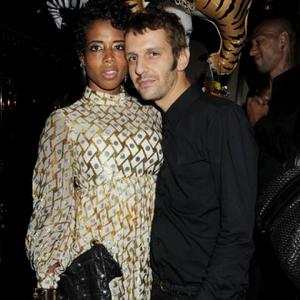 The designer - who has earlier in the day wowed with his spring/summer 2012 collection - joined forces with W Hotels Worldwide and American Express for The Fashion Next bash at W London's Spice Market.

Partygoers were served the specially created W Body Heat and W Mirage cocktails and danced the night away to some classic dance and party tunes.

The party celebrated the collaboration between Marios and W Hotels Worldwide and the creation of a short documentary featuring Marios, Katy England (Marios' stylist) and the Fashion Next designers Craig Lawrence, Jordan Askill and Fleet Ilya, who have been singled out as London's up-and-coming talent. www.youtube.com/watch?v=mFrUKxSk1cg.

During his show earlier in the day, Marios impressed with his latest offering which was inspired by the contrast between light and dark.

Lattice panel constructed dresses showed off svelte silhouettes to perfection and they came in lilac, mint, navy, black, white and black, some with sweetheart necklines and others in swim halter necks.

The collection certainly celebrated the female form and he said of the range: "Everything I do is about hiding and revealing. It encapsulates my passions for an iconic woman, mixing character, an attitude, all The Emotions, it's a very personal collection."