Maren Morris was the big winner at the 2020 Country Music Association Awards, taking home three prizes, including Female Vocalist of the Year. 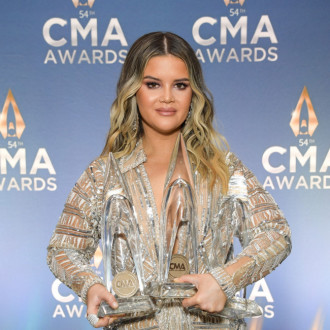 The 'Middle' hitmaker was crowned Female Vocalist of the Year, and also took home the Single of the Year and Song of the Year trophies for her track 'The Bones'.

During her first speech of the night, the 30-year-old singer dedicated her win to the Black women in country music, including Linda Martell, who was the first woman of colour to play the Grand Ole Opry in Nashville in 1969.

She said: “I have a lot of people to thank, and they're the typical ones that lift me up and made this dream come true with me. But there are some names in my mind that I want to give recognition to, because I'm just a fan of their music and they are country as it gets.

And I just want them all to know how much we love them back. And just check out their music after this. It's Linda Martell, Yola, Mickey Guyton, Rissi Palmer, Brittney Spencer, Rhiannon Giddens. There are so many amazing Black women that have pioneered and continue to pioneer this genre. I know they're going to come after me; they've come before me. You've made this genre so, so beautiful. I hope you know that we see you. Thank you for making me so inspired as a singer.”

Eric Church won the most coveted prize of the night, Entertainer of the Year.

It had been predicted that either Carrie Underwood or Miranda Lambert - who made history as the first pair of female solo artists to be nominated in the category since 1979 - would take home the prize.

And during his speech, Eric acknowledged: “If there was ever a year not to win this award!”

Country music legend Charley Pride, 86 - who was the first Black person to host the CMAs back in 1975 with Glen Campbell - was honoured with the Willie Nelson Lifetime Achievement Award.

Old Dominion were named Vocal Group of the Year and Dan + Shay Vocal Duo of the Year.

The latter performed their hit ’10,000 Hours' with Justin Bieber live from The Hollywood Bowl in Los Angeles and also accepted their trophy via telecast.

Despite a number of artists having to pull out from performing due to either testing positive with COVID-19 or coming into contact with someone with the virus, including Lady A, Lee Brice and Florida Georgia Line, the ceremony still saw show-stopping performances from the likes of New Artist of the Year-winner Morgan Wallen, Keith, who performed from Australia, Miranda and Eric.

The ceremony aired with a socially-distanced audience from Nashville’s Music City Center and was hosted by Reba McEntire and Darius Rucker, the latter of whom became the second only Black person to host the awards show.

Entertainer of the Year: Eric Church

Single of the Year - Maren Morris - ‘The Bones’

Song of the Year - Maren Morris - ‘The Bones’