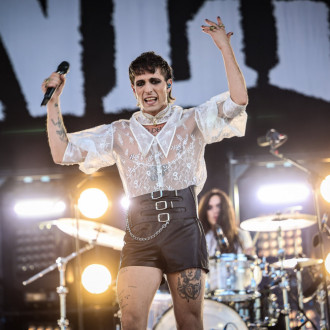 Italy's Maneskin poke fun at the "Italian stereotype" on their latest single, 'MAMMAMIA'.

The 2021 'Eurovision Song Contest' winners - who are known for their eccentric style and raucous rock shows - are the polar opposite of Milan chic and have revealed that their latest song is an "inside joke".

Speaking to the Daily Star newspaper's Wired column, frontman Damiano David explained: "We wrote this song immediately after 'Eurovision', fortunately, this song came out in a few hours.

"That's why we felt it was gonna work and be a banger for us.

"'MAMMAMIA' is an exclamation, and we make a bit of fun of the Italian stereotype, so it's an inside joke."

The group recently starred in an X-rated ad for Gucci after being personally chosen by Alessandro Michele to appear in the fashion house's Aria campaign, because they “capture the revolutionary and joyful impetus of eros as the creative force behind contemporary imagery."

Meanwhile, the 'I Wanna Be Your Slave' rocker insisted they are more "satisfied" to hear of their fans' stories of how they inspired them to come out or dress a certain way, than becoming the biggest band on the planet.

The 22-year-old singer said: "A lot of fans tell us, 'You helped my coming out to my parents' or 'I just up like I want to because I never felt confident before'.

"That's more meaningful than any gold record, and makes us satisfied. It's more than music."

And the style icon insisted there are no egos in the group.