Lindsay Lohan has stopped taking the calls of some of her friends in a bid to remove the bad influences from her life and get herself back on track. 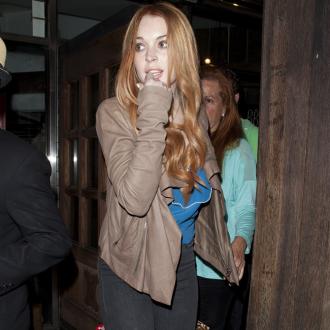 Lindsay Lohan is getting rid of the ''bad influences'' in her life.

The 26-year-old actress - who has endured several stints in rehab and numerous legal problems, including recently having her probation revoked after it was claimed she lied to police - has realised not all of her friends want what is best for her so she is cutting them out of her life in a bid to curb her hard partying lifestyle.

A source told the New York Daily News newspaper: ''She hasn't been texting and calling back some of the people who she just parties with.

''She is realising there are people in her life who are bad influences, who think it's funny when she wants to fill water bottles with alcohol and go out, or stay out all night at nightclubs in New York and look sloppy in photos. These aren't her real friends.''

The 'Liz & Dick' star has been romantically linked with The Wanted hunk Max George and believes this can help bolster public opinion in favour of her, comparing it with Taylor Swift's new relationship with another British boy band star, Harry Styles - though her friends think she still has some way to go.

The source added: ''She knows how everyone looks up to Taylor, and what a good image she has. But it's totally different when you're acting like a groupie.''

The troubled actress is also said to be consulting a spiritual adviser for help, after previously working with the guru when she was dating Samantha Ronson.

A source said: ''There was a woman who she was introduced to a few years ago who worked with the Ronson family she met when she was with Samantha. She worked with a lot of big celebrities.''