Lil Pump closed a car park for an impromptu performance of his signature song 'Gucci Gang'. 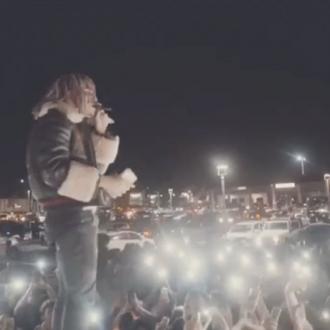 Lil Pump closed a car park with an impromptu performance.

The 17-year-old rapper - whose single 'Gucci Gang' has been rocketing in the charts - celebrated his success with a surprised gig of his signature song for his fans in a parking lot.

Lil Pump - whose real name is Gazzy Garcia - was stood on top of a parked truck while he rapped and was surrounded by fans, who used their phones to light up his impromptu appearance while singing along.

A video was posted on his official Twitter account with the caption: ''Parking lot. I love y'all (sic)''

His impromptu gig caused a meltdown on social media with fans posting pictures and videos of the rapper.

One wrote: ''@LilPump performed ''Gucci Gang'' from the top of a van for a parking lot full of screaming fans. (sic)''

And another wished they could live like the rapper, writing: ''I WANNA LIVE LIKE THIS F**KING GUYYYYYYY #SUPERTTMANN #ESSKEETIT (sic)''

Many of his fans praised Pump's performance, dubbing him ''too boss'' and another claiming that he is their husband.

His signature song 'Gucci Gang' recently made headlines in Canada for its comments of a Canadian airline in the lyric ''f**k Westjet''.

The Miami-born rapper included the lyrics in his song after he was told he was not allowed to fly on Westjet airlines because he was drunk and disorderly on a journey from Vancouver to Toronto.

He raps: ''They kicked me out the plane off a Percocet. Now Lil Pump flyin' private jet (sic)''.