The rockstar will be returning to Michigan for a homecoming performance.

What do you get if you cross Run-DMC, Lynyrd Skynyrd and AC/DC? According to Pitchfork magazine, the answer is Kid Rock. Romeo Michigan’s favorite son is not such a kid anymore, having turned 50 earlier this year. In fact, he’s more a founding father of what’s now considered to be the rap rock sound. 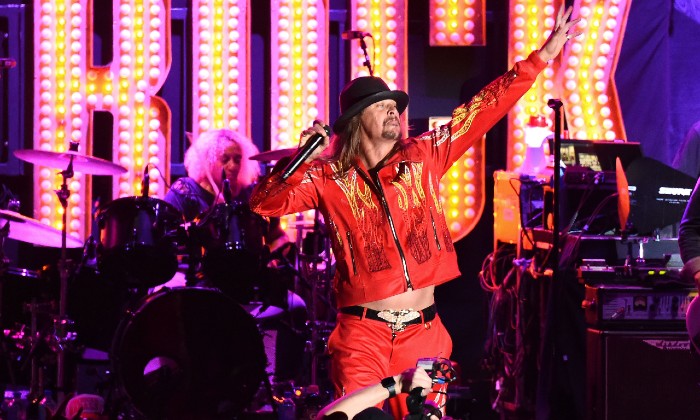 You’ll soon be in a position to hear that unique sound for yourself. On August 14, he’ll be performing a one night only show at Mount Pleasant’s Soaring Eagle Casino, a venue that’s just a two hour drive from Kid Rock’s birthplace and is rapidly acquiring a reputation of its own for attracting some of the biggest and most eclectic names on the music scene. As if to prove the point, he’ll be joined by another of Michigan’s biggest names, the American Band themselves, Grand Funk Railroad, who were touring before Kid Rock was even born.

In an age when succeeding in the music business can be more about looking the part and surrounding yourself with the right people, Kid Rock is a refreshing reminder of what real musicianship is all about. The fact that he’s experimented with multiple genres, from hip hop to country to metal and all points in between, is well known. What fewer people realize is the level of control he has in creating his unique sound.

Kid Rock is self taught, and is also something of a prodigy. He’s proficient in playing every instrument that’s used in his music, including guitar, piano, drums and more. If he can’t play it himself, you won’t hear it. He also takes far more of a leading role in the production process – in fact, all but two of his albums have been self-produced.

He’s been nominated for 13 awards over the years, including Best New Artist in the 2000 Grammys, despite having been on the scene for 10 years by then, and Best Male Video for Cowboy in the MTV awards the same year. In 2009, he was awarded a star on the Music City Walk of Fame.

When the Soaring Eagle opened for business in 1988, it was purely focused on casino gaming, and it’s still regarded as one of Michigan’s premier casinos. In fact, popular casino site NoDepositHero are quoted as saying, “Soaring Eagle Casino Resort is consistently voted the most popular casino in Michigan.” However, over the past decade, it has also started to attract some top music acts from all around the world.

These have included Bon Jovi, Deep Purple, Nickelback, Rod Stewart, Boston and Whitesnake, to name just a handful.  A look at the other upcoming shows scheduled for the rest of 2021 demonstrates that there’s no let-up, despite the difficulties of recent months. Keith Urban, Snoop Dogg and Megadeth are among the eclectic names scheduled to appear at the venue’s outdoor amphitheater between now and the end of August.

Soaring Eagle resort also boasts a hotel, health spa, conference facilities, golf, cyber quest and even boating facilities. In addition, there’s a huge choice of dining options, from casual comfort food to international fine dining, so there really is something for everyone.

Given the stellar names that has played there in the past, it is no surprise that acts native to Michigan are also proud to put on a show at the Soaring Eagle. Kid Rock is being supported by the legendary Grand Funk Railroad. The iconic rock band is ideally suited to this kind of arena, and is celebrating 52 years of touring. Now a five piece band, Grand Funk still features two of the original trio, with Mel Schacher on bass and Don Brewer on drums and vocals. They’ll be joined by 38 Special Veteran Max Carl on lead vocals, former KISS lead guitarist Bruce Kulick and on keyboards, the hugely respected “Dr Tim” Casher who has toured with respected names like Bob Seger and Robert Palmer.

Kid Rock and Grand Funk are two genuine legends of the Michigan music scene, and the only disappointing thing is that they are not playing a few extra nights. As things stand, the 11,000 capacity venue is certain to be filled to capacity on August 14. Tickets are available from the venue and prices start at $49 for general admission. Note that rules regarding masks and other possible precautions will be confirmed closer to the date.