Kaia Vieira talks about her 90s inspirations, band break-ups and the problems with perfectionism [Exclusive]

Her EP 'Vikara' is out now.

Trip hop artist Kaia Vieira dropped her debut EP Vikara earlier this year through These Furious Recordings, and now we release an interview with her discussing her biggest influences and how she's overcome creative challenges. 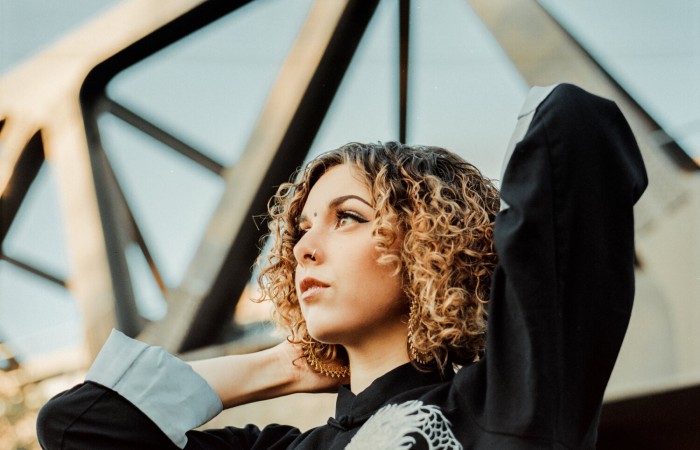 Mmm, I have this kind of affair with old skool 90s drum breaks, equally from trip hop as much as proper gritty, old skool jungle. My music ends up grabbing random snippets of these genres particularly in the breaks, bass and electronics. It's been likened to Portishead and Little Dragon to give you some idea, but I'd have to add that Prodigy's grimey vinyl dnb-esk drum loops were a massive inspiration too.

Ominous harmony is also a bit of an obsession of mine. I like finding (to me) new, obscure eastern-derived scales. My new favourite is Hon-Kumoi-Joshi: it's even more glorious than its name if you can believe it. But yeah, live breaks, grimey electronics, a far bit of piano, eery synths and soulful vocals.

I honestly think my experience with my first band breaking up was the most harrowing so far. Obviously, there's been a lot of often brutal grit and hustle since, especially as this first band was very much before I was actively pushing my career, but it's just heartbreaking as a young musician having your first musical family fall apart and tensions run high. I'm so grateful now though for the experience as it made me value creating a positive, trustworthy team that I'm blessed to say I've found in my live band now. I think at the end of the day the relationships within any area of your life are the make or breaks - whether that be with yourself, your friends or your work crew.

It's tough, for sure - the more tech, the wider the platform and the more music than ever before so the wall of white noise is harder to break through. I think the most difficult part is figuring out how to market yourself authentically. It's a case of trying to pick out little things about yourself that are the most unique that you can then heighten and amplify to use in your marketing and monetisation of your work and essentially your self - your 'brand'. It was for sure something very uncomfortable and alien to me at first, but it was mostly a case of re-programming the negative underlying judgements I had about business and marketing. You just have to make the choice to view marketing your music and personality as not necessarily a negative thing, but as part of the creative process and an art in itself.

Massively. I'm just wanting to create music that's very much my own, you know. I think the only unique selling point anyone has is their individuality, so it's vital not to lose that at any stage of the process. I would say, however, that one of my worst traits is my perfectionism. It used to be debilitating, taking me a long while to have the courage to show and push my music. But I came to recognise it and realise, in Elizabeth Gilbert's words, it's just 'fear dressed up'. Creating anything isn't a completely solo job, it requires relinquishing some kind of control at some stage - whether that be working with a producer or within a band, so I've often found that as much as I'll always try to create work as authentically me as possible, my greatest joys have just as often come once I could let loose of that grip.

Musically, I often draw different aspects from different genres - my beat ideas I pull more from instrumental based music like neuro dnb and electronic/experimental jazz. Not in the electronic realm, but particularly rhythmically, I love jazz artist Avishai Cohen (the double bassist). I also love manic breaks and odd sub-divisions, but just as much a solid, if wonky Dilla style back beat. I'm actually really getting into film scoring to draw from harmonically and soundscape-wise too. From the more traditional Ennio Moriconne, to anime wizard Joe Hisaishi and then to the modern sound-design realms of Hildur Guðnadóttir and Jóhann Jóhannsson. My manager Paul actually really got me into Hildur. I'd heard of Jóhann from the film 'Arrival's score which blew my mind and when Paul introduced me to her as a close collaborator of Jóhann's I was hooked. If anyone doesn't know, Hildur was also the solo scorer behind the most recent 'Joker' film and it's just gut wrenching - I love it.

Other than music, I get so much inspiration just from putting myself in green places and reading. Old age wisdom is always timeless too. Just finished reading 'The Prophet' - it was just so rich and dense I often couldn't consume more than a chapter in one sitting!

Thom Yorke. He has this way of creating completely harrowing yet liberatingly serene soundscapes that just break me. I was learning his tune 'Unmade' on the keys and literally burst into tears mid-learn. I mean, I'm pretty emotional but his music just does funny things to me!

I have very cold feet. To the point that days working on home I often have to hair dry them and my 2 layers of socks at least 3 different times.

Of course. I'm a travel bum really but feel lost without taking my music with me so the two combined is the dream. Lots of new spaces, new cultures, new stages. I feel at home on the stage with my live band more than anywhere else, and so of course dream of the greatest stages to skank out on with them. I think as much as there are many milestones I want to hit, ultimately it's about creating a life you enjoy living, so yeah - getting to collaborate and work with artists that inspire and intimidate me in equal measures, travel the world, create art that can heal and inspire the masses and write/perform music I'm obsessed with. So, just the basics! Ha.

I'm currently working on building the catalogue and so would like to be releasing my next EP or album, hopefully with the backing or at least interest of a larger entity... I want to be careful about saying label as I'm not set on what kind of label I'd like to work with yet, just one that can support my artistic independence and greater vision of a worldwide reach. Apart from the recording side, I'm hoping the world will be on a healing path from this pandemic and the music industry will be on the road to recovery with a summer of festivals in full swing. That'd also be the dream for the live music - to have a line up on the way for the full band.

So, 'Where Did You Go?' is the first single from my EP 'Vikara'. We also have a second single 'The Care Giver': described as a 'celestial groover' by the PR company 'A Badge of Friendship' I'm working with which I absolutely love! It's much more classic trip-hop than 'Where Did You Go?' - with a rap/sung chorus structure and the musicality is more down-tempo, pulsing and piano-based. Aside from the recordings, I've got some live quarantine sessions in the process with beatboxer 'Bass Ventura' and my full band that'll be on the way soon too. Into the summer, I maaay also be exploring the dnb realms.