John Hamm is proud that 'Mad Men' that his character Don Draper and his co-stars make viewers want to booze and smoke. 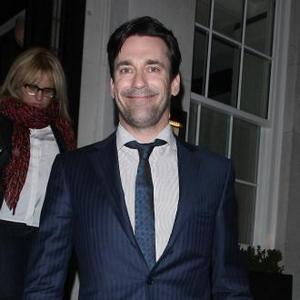 The 41-year-old actor plays hard-drinking and hard-smoking character Don Draper in the 1960s advertising drama and he admits he has to smoke ''a lot'' of herbal cigarettes for the part.

John doesn't care that the show seemingly inspires viewers to live unhealthy lifestyles and he instead encourages it.

He said: ''Someone actually watched the pilot and counted the number of cigarettes I smoked in that episode and it was something like 74. You can hear it in my voice, it is a debilitating endeavour. But we're being realistic - people did smoke back then. My father smoked everywhere, even in the car, in the summertime, with the windows up - it was part of life. I have read that watching the show makes some people at home want to smoke and drink. I think, well, knock yourself out.''

Rather than find it difficult to play someone so different from himself, John enjoys it.

He says it's particularly fun to shoot womaniser Don's love scenes because he has been in a committed relationship with actress-and-screenwriter Jennifer Westfeldt for 15 years.

In an interview with the Metro newspaper, he said: ''It is amusing (to play a womaniser) and that's part of the reason this is a dream job. It is great to play someone that is so different from myself. ''That is what every actor wants to do - to have the chance to go up there and not be themselves.''