Iman has admitted modeling isn't hard in comparison to ''other jobs'', but does find keeping high ''self-esteem'' hard. 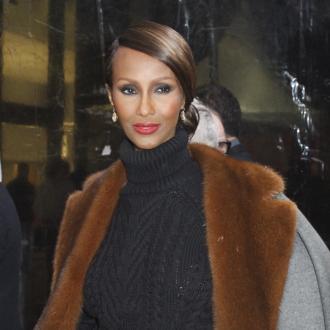 The 60-year-old supermodel has admitted her profession is easy, compared to ''other jobs'', as you have people waiting on you hand and foot, but added it becomes difficult for ''self-esteem'' when she has to compete with beautiful women like Cindy Crawford.

Iman said: ''People say that modeling is hard. It isn't, really, when you compare it to other jobs. I mean, you get to the job and when you arrive, there is a makeup artist, manicurist, and hairdresser and you're working from nine to five. Seriously. The exterior and environment is not hard.

''Your self-esteem is the hard part. I can wake up and be like, 'I look good, I got this'. And then I get to the job and there is Cindy Crawford! That will bring you down in a second!''

The Somalian beauty - who has been married to David Bowie since 1992 - went on to confess she has always suffered from ''low self-esteem'', but has become more accepting of herself as she's got older.

Speaking to NYMAG.com's The Cut, Iman said: ''I suffer from low self-esteem. I had horrible self-esteem growing up. You really have to save yourself because the critic within you will eat you up. It's not the outside world, it's your interior life, that critic within you that you have to silence.

''Find something to like about yourself and hold on to that. It's a constant battle whether you are 16 or 50. As you age, you do really find that quietness inside and that being-comfortable-in-your-skin feeling.''