What do slots have to do with music?

The world may have lost some incredible musicians in recent years but the likes of David Bowie, Prince and Lemmy will always live on through their work. However, with the aforementioned artists selling more than 250 million records between them, their legends stretch way beyond the music. 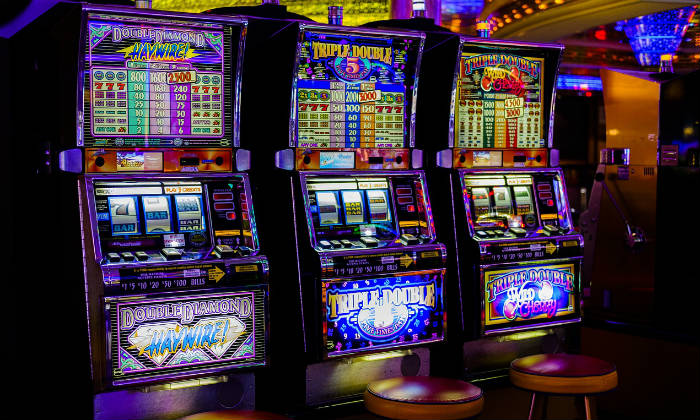 When you stop and think about the global reach major artists have, it's easy to see why fans become so invested not only in their work but their lives. For example, fans of Prince can now take a tour of his famed mansion, Paisley Park, in the same way Elvis followers can visit Graceland. But there's much, much more.

Beyond the music and the private lives of musicians, you've got musicals. In recent years, musicals have become another way to honour those that have passed and, in turn, provide another way for fans to engage with their idols. Scour the pages of any stage show guide and some familiar names will pop up. Over in London's West End, some of the best voices in theatre have been belting out hits from Tina Turner since 2018. Skip across the Atlantic to Las Vegas and Cirque du Soleil's Michael Jackson: One generates $90 million/£75 million in ticket sales every year.

Of course, as is often the case when an act reaches legendary status, the tributes become even more outlandish and off-the-wall. For instance, did you know you can be buried in a Kiss-themed coffin? If that doesn't suit, how about a retro phone modelled on the famous Rolling Stones lips? Still not enough, well what about a game that takes everything you love about music and combines it with some classic gameplay?

When Music Becomes a Game

Video gamers will remember Sega's series of Michael Jackson Moonwalker games in the early nineties. However, what we've seen in more recent years is an explosion of online casino games featuring music's finest. Part of an industry that's worth £14.5 billion in the UK alone, these games pour various forms of entertainment into a single product. Alongside the inherent appeal of slot machines, these musical tributes feature official imagery, animations and, of course, famous tuns.

However, what's interesting about these slots is that they're not just crass money-spinners. Today, hundreds of options, casino games need a USP. At Wink Slots, the online slots lobby contains upwards of 200 titles. To make something that stands out from the crowd, developers can't simply fill their slots with music-based iconography and hope for the best. Instead, if you look inside Wink Slots at Guns N' Roses, you'll see that these games combine style and substance. In practice, this means players can activate the Encore Free Spins bonus and use band members as wilds.

Put simply, musical slots need to tie together theme, form and function. If they can do that, they're not only liable to become a hit but another way for fans to squeeze another ounce of enjoyment from their favourite acts. With this in mind, we've picked out three music-themed slots that will get your heads bobbing and fingers tapping the bet button time and time again.

Motorhead's Lemmy eerily predicted his own demise just months before he left us in December 2015. Exiting stage-left soon after former bandmate Phil 'Philthy Animal' Taylor, the frontman is one of rock's most iconic figures.

Anyone who knew Lemmy will be aware that he was a huge fan of the slot machines and, if he is looking down, he would therefore surely approve that a game has been published honouring his band.

Motorhead: The Slot Game has been produced by leading software provider NetEnt. This developer first appeared in 1996 and are particularly noted for their graphically heavy slot titles. Motorhead is a five-reel, 76-payline game with a low entry point in terms of stakes and the symbols involved would certainly appeal to the late Mr Ian 'Lemmy' Kilmister himself.

The Ace of Spades and Bomber icons pay proper tributes to two of the band's best-known songs while also paving the way towards bonuses and special features. It all plays out to a great Motorhead soundtrack. For fans of the band who like to play slots, this is an entertaining option.

The late, great Jimi Hendrix died way back in 1970 but his legacy lives on with many current guitar legends attributing their success to him. Hendrix is immortalised in many ways including his own personalized slot game, which is also published by NetEnt.

Like the Motorhead slot, this game honours some of Hendrix's top tracks with the Purple Haze free spins bonus being one of the more obvious tributes. The soundtrack contains hits such as Cross Town Traffic and, because of Hendrix's popularity, this slot game is available around the world.

Thankfully, the key members of Guns n' Roses are still with us but the band is often in and out of disarray. Although they reformed and toured in 2018, we never know how long the harmony will last. Fortunately, just in case they're on another hiatus, you can play the G N' R slot game from NetEnt.

By now you'll be familiar with the theme: a blasting soundtrack in a game featuring familiar song titles on its reels. Guitars and records form the symbols this time around. They may be gone, or in the case of Guns n' Roses, they are here but not as we know them, so if you want to remember some of our departed musical icons, it may be worth a try.

Spin in Time with Your Favourite Artists

As you can see, slots are an unlikely but entertaining way to pay homage to your favourite artists. In fact, even if you don't want to spend any money, these spinners can be played for free. Using practice software, you can spin the reels, listen to some tunes and simply have some fun. Of course, for the full experience, placing some real money bets could help you win jackpots worth thousands. However, whichever way you decide to play, musical slots are just another interesting way you can interact with and immerse yourself in the culture of some fantastic singers, songwriters and performers.