'Harry Potter' fans have set a new record for the most people to simultaneously board a broom online. 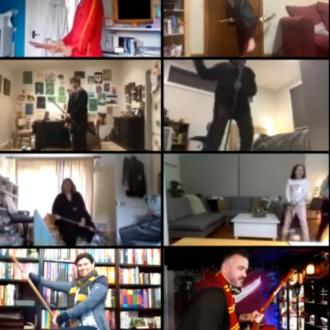 'Harry Potter' fans from 40 countries around the world have united to set a virtual Guinness World Record.

Hundreds of fans from six different continents joined forces to create a new record for the most people to simultaneously board a broom, in recognition of the boy wizard's favourite sport, Quidditch.

The online record attempt was staged to promote the publication of 'Quidditch Through the Ages', written by J.K. Rowling and illustrated by Emily Gravett.

Reflecting on the record-breaking achievement, a spokesperson from Bloomsbury Publishing said: ''We're thrilled that so many people took the time to take part in this successful Guinness World Records attempt.

''It's wonderful that during this challenging time video-sharing platforms allow fans to come together and celebrate in new and unique ways.

''To have so many people from a wide range of countries take to their brooms demonstrates the passion that 'Harry Potter' fans have and the popularity of Quidditch.''

They all took to computers, laptops, phones and tablets to create a new landmark for the most people to simultaneously board a broom online.

And the Guinness Book of World Records has now confirmed that a new landmark has been set, with 133 simultaneously joining the effort.

Mia Stasic, 11 - who is from Nottingham in England - loved being part of the challenge.

The 'Harry Potter' fan said: ''I've been practising my brooms skills all week after borrowing the broom from my mum!

''We've all being doing lots of family and school video calls during lockdown, so it's great to put the skills to good use and set a world record!''