They're the latest band to get into the betting game.

When Guns 'N' Roses released their debut album 'Appetite for Destruction' in 1987, they blew the world away with their gritty style of metal. At one time they were the proud bearers of the moniker 'The Most Dangerous Band in the World' and with their bold style of rock 'n' roll and their love of fast living had even the notorious Motley Crüe on the backfoot. Since that debut, the band has gone through numerous line-up changes, but frontman Axl Rose has remained at the helm right through to their last album, Chinese Democracy. Today, Guns 'N' Roses are still making music and performing live, drawing fans from their heyday to their gigs as well as attracting new lovers of their music. However, one factor that really makes them stand out from the crowd is the Guns 'N' Roses inspired online slot. There aren't many rock bands with a game based on them, which says a lot about their status. The game's graphics are sharp and interesting, with the background of the game being a live stage, and there is a hint of nostalgia about the slot. If all of this sounds appealing, you can try out a demo here. 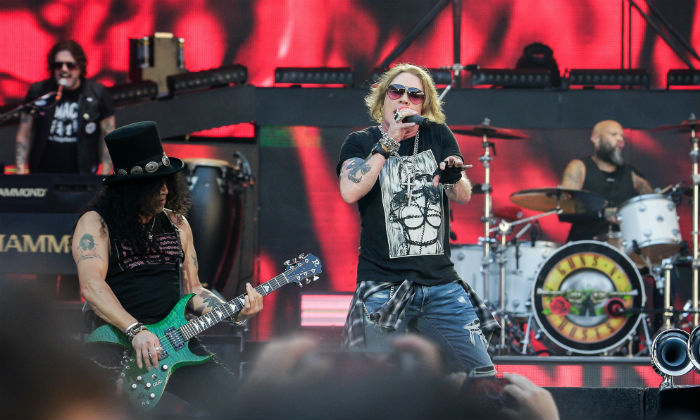 A band with a real impact

Guns 'N' Roses were a real surprise. Hair metal was all the rage when they came out, and they could have been just another shaggy haired rock band trying to make it big, but they had their own look and style. "Welcome to the Jungle" gets things underway on "Appetite for Destruction", with a big drum sound kicking in from ex-tub thumper Steven Adler after the opening riff. A little later in the album, the melodic rock ballad 'Sweet Child O' Mine' shows a more tender side of the edgy band. When they heard it all, music fans and journalists alike knew something special had arrived.

Not only their music was attracting attention, though. The band have long carried a reputation for excess, and there have been some crazy moments. Axl Rose has a special reputation for showing up late to gigs, not turning up at all and, in general, for throwing tantrums. The majority of the band in the "Appetite for Destruction" days had a reputation for drug and alcohol abuse and the band also had its violent moments. In the song 'One in a Million' on the album 'Lies', the band caused upset with homophobic references, too. Controversy was never far away.

Yet for all the controversy, the band have produced some truly terrific albums. After several years away from the scene, they returned with the magnificent double album "Use Your Illusion," which featured the popular band "November Rain", the ballad itself making history by being the first music video to receive a billion views released before the days of YouTube. The album was also home to the monstrous "You Could Be Mine", which had the privilege of featuring on the "Terminator 2: Judgment Day" soundtrack. The album also boasted a screeching cover of Wings' "Live and Let Die" and two different versions of the band's gentle ballad 'Don't Cry'.

This is a band that appealed to teenagers in a big way when they came out. Singers like David Lee Roth might have won the admiration of the youth with their image and vocals, but Axl Rose and his team were the ones who truly spoke to them. They were young enough to remember all the struggles of their teenage years. all the angst. all the rebellion. all the insecurity. This was a band that truly understand what teenagers were feeling.

The wild ones have been around for more than 30 years now, time enough to have inspired a slot, the Guns 'N' Roses slot, to celebrate their 30th birthday. It's a five-reeler, has 20 paylines and comes from Net Entertainment. Not only is it a hit with music fans, but also with online slots fans in general, partly because of neat little touches such as the cheer from the fans players get if they hit a winning combination. If you do happen to be a fan, you'll enjoy the experience even more because you can choose your playlist, which will operate while you're playing the game.

Axl Rose, Duff McKagan and Slash feature as higher paying symbols, whereas low-paying icons are simple card symbols but with a traditional rose decoration. The Guns 'N' Roses logo is the Wild and can land on the first, third and last reel. There it can expand even further and create additional winning combinations.

Like all slot machines worth their salt, the game features some fabulous bonuses. You can launch the Bonus Wheel if you land three bonus symbols on the first, third and fifth reel all at the same time. The game offers the bonuses at random and will present you with the Crowd Pleaser, a levels and coins bonus game; the Encore, which awards you 10 free spins and will pick a reel at random to become completely Wild so that you can win more; or a direct coin win.

Guns 'N' Roses aren't the only band to have inspired slots. Face-paint loving rockers Kiss have so, as have the late Elvis Presley and deceased guitar god Jimi Hendrix. The success of the band and of their slot might inspire other rockers to follow suit. Boston rockers Aerosmith, who released "Permanent Vacation" in the same year as "Appetite for Destruction" could be a potential candidate. Veteran hardcore rockers AC/DC might also be worthy of a slot, thanks to their contribution to music and the lead guitarist Angus Young's schoolboy outfit costume.

With their brash hard-rock style and outlandish behavior, Guns 'N' Roses have well and truly sealed their place in the Rock and Roll Hall of Fame, and also in the hearts of rock lovers young and old. There's been controversy, but some seriously good rock tunes and albums have emerged amidst the chaos. Not only that, a slot theme also exists in tribute to a band that has been going for more than 30 years. Now that's what you can call rock 'n' roll.