Gregory Porter is desperate for Tom Hanks to star in his music videos. 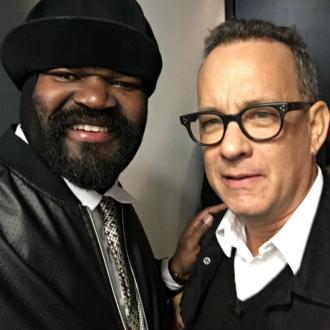 Gregory Porter is desperate for Tom Hanks to star in his music videos.

The 44-year-old powerhouse has admitted he wants the 'Cast Away' actor to feature in one of the clips to accompany his hit tracks in the future after he saw the Hollywood star dance in Carly Rae Jepsen's video 'I Really Like You'.

The soul singer - who befriended Hanks on BBC's 'The One Show' on Wednesday (12.10.16) - said ''It was a pleasure to meet Tom. We are a big fans of his movies in our house and I'm looking forward to having the opportunity to watch his new movie 'Inferno' ... I know Tom's starred in a music video recently and his dancing was great. So you never know ... I'd love to work with him one day.''

And The 'Take Me To The Alley' hitmaker - who has collaborated with Laura Mvula on 'Water Under Bridges' - swiftly shared a photo of him with his icon after the show.

Alongside a selfie of the newly acquainted pals, which was posted to Porter's Twitter page, he wrote: ''Great hang with @tomhanks at @BBCTheOneShow tonight! (sic)''

Meanwhile, Porter is set to star in his debut documentary film called 'Gregory Porter: Don't Forget Your Music', which is due to hit the big screen later this year.