Having just released their newest album Don't Look Back, Finland's Grandmother Corn have been spreading their music across the UK. It seems only appropriate given that one of their biggest influences is 60s British rock music, and with songs like Up to the Moon, we're happy to have them here. 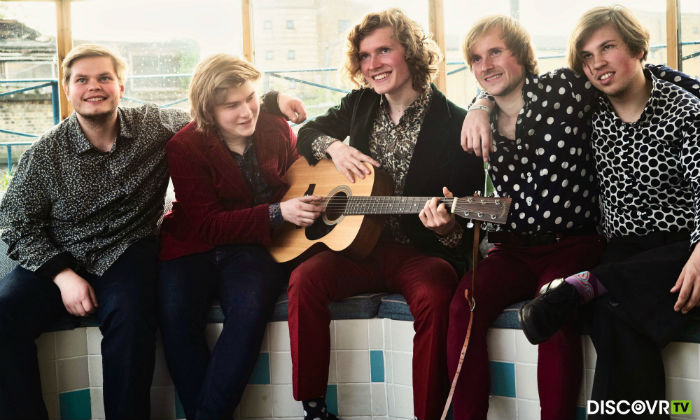 Up to the Moon is an uplifting song with an oldies vibe which the band self-produced and recorded in Helsinki following their return from their first UK tour. They completed the recording within 12 hours with the help of mixer Mikko Kananoja, and it was pretty much completed the following day.

"Like all of our recordings it was recorded completely in analog domain using only tape recorders", they told Discovr.TV in an interview when they performed a live session at Near & Far Camden.

According to the band, the song was inspired by the excitement surrounding the 50th anniversary of the 1969 Apollo 11 moon landing last year, with sonic influences from 1968's The Kinks Are the Village Green Preservation Society and Elvis Costello's 1977 album My Aim Is True.

"Musically the single was mostly inspired by The Kinks, Elvis Costello's first album and The Clash", they explained. "The extremely dry soundscape of the mix was influenced also by The Strokes.

"Teo wrote the track on his holiday in London last December", they continued. "The idea for the lyrics came from witnessing all the hustle around the upcoming anniversary of the Moon landing."

It seems it was rather a stroke of luck we get to listen to the track at all, given Teo's penchant for not remembering songs he has written in his head, but fortunately this earworm of a tune wasn't one he could forget.

"It came to Teo's head full formed with the lyrics, melody and all", the band recalled. "Usually when this happens he tends to forget the song right away before writing it down but this time, luckily, the song stuck for the whole week before he got to his guitar and could make a demo recording of it."

Put Up to the Moon on your motivational playlist because this is one of those tracks that will cheer up any rainy day. This is the kind of happy hippy vibe that we need to remind us that summer is just round the corner.

"If you play Up to the Moon first thing in the morning it really does help you get out of bed", they suggest. "Also we'd like to point out that for best results you should play the song as loud as possible."

If you love Grandmother Corn as much as us, you can catch them live at London's Rocksteady on February 14th for a perfect Valentine's Day date. They'll also set to play Manchester's Night People & The Twisted Wheel Club on February 15th. Tickets are available from their website.

Read the full interview with Grandmother Corn on Discovr.TV.