And there's more where that came from with January's 'Leave Me Alone'.

We may have officially left the summer behind for 2015, but Madrid ladies Hinds are proving that there's still room for partying to hazy rock anthems out in the... 'Garden'. Rain or shine, this new track will definitely plaster smiles on all listeners' faces and marks the perfect introduction to their upcoming debut album. 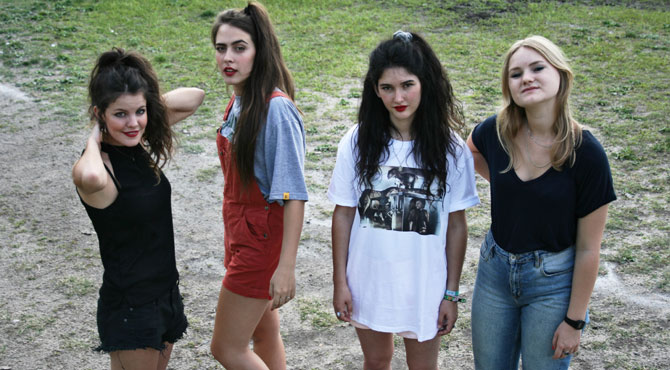 It's a blessing that the DIY garage ethic is back, because this Spanish four-piece do it just brilliantly. 'Garden' has that rough lo-fi effect that's missing from a lot of contemporary rock songs, and the 90s pop-punk elements to it give it a fun twist of nostalgia. Pair that with their sultry yet grungey vocals and you've almost got a riot grrrl ethos going on. Plus, you'll find it a little difficult to keep still in the motion of these catchy hooks and soaring harmonies.

Ana Perrote, Carlotta Cosials, Ade Martin and Amber Grimbergen of Hinds recently admitted: 'We f**king love this song. And we knew it will open the album since the very beginning. Please don't say it was a sh**ty decision.' It's highly doubtful anyone's going to say that, girls! Mind you, we'll have to wait until next year to find out what the rest of debut album 'Leave Me Alone' will bring.

More: The Japanese House is another artist you need to listen to this month

We've already had other tasters such as 'Bamboo' and 'Chili Town', which appeared on their limited edition EP earlier this year entitled 'The Very Best of Hinds So Far'. It also featured a sensational cover of The Headcoats' 'Davey Crockett', for which they released a collaborative video also featuring The Parrots' cover of 'All My Loving'. But this upcoming album is sure to be a must have for all rock lovers when it officially arrives.

Hot on the heels of their US headline tour, as well as prestigious spots at Glastonbury and End of the Road Festival, you can catch them in the UK in February 2016 during their ten dates.

'Leave Me Alone' is set to be released on January 8th 2016 through Lucky Number Records.