FKA twigs has revealed she found out she is closely related to Jorja Smith. 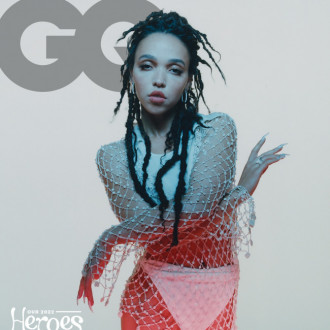 The 'Tears In The Club' singer has revealed she only found out that the 25-year-old West Midlands singer-songwriter is a relative after the pair teamed up on twigs' song 'Darjeeling' from her latest mixtape, 'CAPRISONGS', which was released in January.

Speaking to the July/August issue of British GQ magazine, the 34-year-old singer - whose real name is Tahliah Barnett - spilled: "I'd never met her before, and I jumped in her car with her ... and I remember thinking to myself, 'Gosh, that's really strange. We've got exactly the same kind of skin.' A few months later, I was on the road to go to LA and [Jorja] left me a voice note saying 'you're never going to believe this, but I've just spoken to my dad and he's spoken to his sister and we're related."

Twigs admitted she felt a lot of freedom creating 'CAPRISONGS'.

She told the publication: "I didn't feel trapped, I felt like I was just being myself. But I guess I just unlocked a new door, like a video game. It's not even like I broke out. I think I just unlocked another level. It's so good."

Ahead of releasing the mixtape, the 'cellophane' star explained how she felt compelled to document her journey of "falling in love with music and herself all over again."

She posted on Instagram alongside the artwork: “Hey i made you a mixtape, because when i feel you, i feel me and when i feel me, it feels good…

“‘CAPRISONGS’ is my journey back to myself through my amazing collaborators and friends.

“It’s my stubborn caprisun ass telling me to work thru my pain by delivering at work, don’t think just go studio and create my saggi moon being the enigmatic temptress craving the club, to dance and to be social and my pisce venus hot mess disastrous heart falling in love all over again but this time with music and with myself. (sic)"

As well as Jorja, it features The Weeknd on 'Tears In The Club', plus Pa Salieu, Shygirl, Daniel Caesar and more.

The July/ August issue of British GQ is available via digital download and on newsstands on 28th June.

Read the full interview via https://www.gq-magazine.co.uk/culture/article/fka-twigs-interview.