Five Seconds of Summer guitarist Michael Clifford was treated for burns, after he found himself on the wrong end of some pyrotechnics during one of the band's London gigs at Wembley Arena. According to BBC Newsbeat, the shocker came sometime into the show at Wembley Arena and the band were forced to cancel the rest of the gig, while Clifford was rushed into hospital and treated for burns. 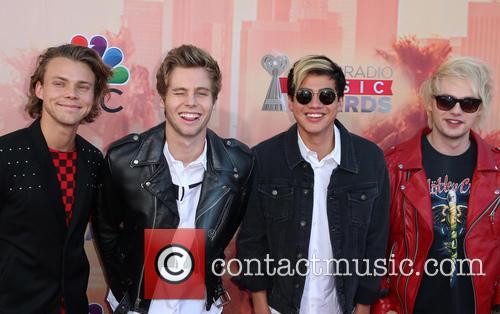 The burns seemed pretty serious, but Michael is currently recovering.

The news was announced by bandmate Ashton Irwin, who wrote on Twitter: "Michael has hurt himself so we will not be continuing the show right now. He is okay."

Later on, Clifford himself joined the conversation, reassuring fans and thanking them for their support. On Saturday night, he posted a photo of himself on instagram, with half his face in bandages, but still giving a “thumbs up”.

More: 5 Seconds of Summer Are a Boy Band, but It's Not Because of Their Music

Videos of the incident, recorded by fans, quickly made their way online, alongside messages of concern and heaps of well-wishes – mostly in all caps, it seems.

Fans have been tweeting their support with one saying: "I just want to hug Michael Gordon Clifford" and another posting: "Can't sleep because I'm worried about Michael".

More: 5 Seconds of Summer Reportedly Kicked Out of a Bar for Being Underage

#GETWELLSOONMICHAEL was trending on Twitter. Michael has thanked fans for their concern.