Final Ticket Release For We Are Fstvl 2016

Winner of Best New Festival and Best International -We are Fstvl returns for a 4th year with a final batch of tickets released.

The festival, which takes place on bank holiday weekend 28-29 May, will see a queueing system in place this weekend for a chance to grab tickets and join 50,000 other festival goers.  Due to high demand there is a limited amount of final day tickets for Saturday have been released while Sunday door tickets are now on sale.

Armand Van Helden, Henrik Schwarz and Hold Youth are the latest additions to the electronic and dance festival. The acts will join some of the biggest Dj's in the world with the likes of Fatboy Slim, DJ Philip George and Steven Angello at the London festival held at the Airfield of Dreams, Upminster.

We Are Fstvl 2016 kicks off the UK's summer festival season with over 200 DJ's and acts set to play across 16 stages deciding who too see this year will be tough plan ahead to avoid those stage clashes of your must see acts. This year's festival will be bigger and better and will see new stylised arenas and structure across the site. There are five different zones featured at the site including Ancient Realm, Favela Fiesta and Island Hideaway separating the acts and stages.

Saturday will see Fatboy Slim, aka Norman Cook, return to the 2 day festival headlining the main stage. The English DJ recently collaborated with actor and DJ Idris Elba with a track titled 'The Road Less Travelled' for Elba's latest cinema release Bastille Day. The iconic DJ will play tracks from his decade spanning back catalogue. 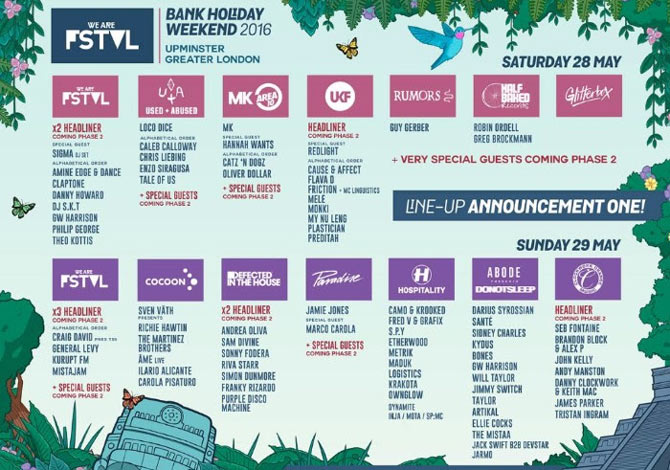 Heading the Sunday will be Greek-Swedish DJ Steve Angello playing tracks from his recent release Wild Youth. The Swedish House member will most likely mix tracks from his former super group which will no doubt send festival goers into a frenzy.

VIP tickets for We are Fstvl are available offering private stage performances from Roger Sanchez, Amine Edge & DANCE and Todd Terry in a more up close and personal area and see play live. The VIP also includes a chance to indulge in the award-winning cocktail bars and hot tubs for those who are harder at surviving at a music festival.