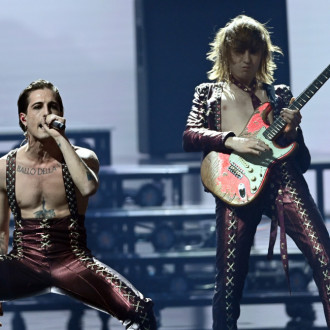 Maneskin are hoping to collaborate with Miley Cyrus.

The 'Eurovision Song Contest' winners - who triumphed as they represented Italy in the annual music competition last month - received kind words from some of their inspirations, and they would love to work with the 'Wrecking Ball' hitmaker in the future.

Bassist Victoria De Angelis told the Metro newspaper's Guilty Pleasure column: "Some of the artists we look up to the most texted us saying, 'Good job guys, we love you.'

"We'll have to try and convince her [to work with us]. We can send her hundreds of texts on Instagram."

It seems Miley could be keen, as just this week she shared frontman Damiano David and guitarist Thomas Raggi's cover of her hit 'Midnight Sky'.

She added: "My best friends".

Meanwhile, Daviano admitted the group's lives have massively changed since their crowning glory in Rotterdam - where they won with their hit 'Zitti e buoni' ('Shut Up and Behave') - but they won't be letting worldwide fame go to their heads.

He said: "The whole world around us has changed obviously, with the attention, and now we have the chance to work with he best professionals in the world.

"But backstage, we are not so serious, where we have to make [demands]. I ask for a water bottle - with a straw!"

Although the band aren't opposed to having a drink together, Damiano joked that their music is the "most rock and roll" part of their lives.

He added: "When we chill together, we go for a drink - maybe two, maybe three. Yeah, we're quite rock and roll, but our music is the most rock and roll about us."