Lucie Jones has revealed her bid to win the 'Eurovision Song Contest' for the UK has the full backing of One Direction star Liam Payne and his newborn baby son Bear - his first child with girlfriend Cheryl. 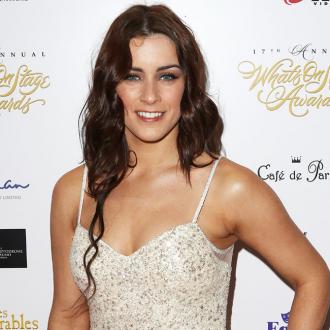 'Eurovision Song Contest' hopeful Lucie Jones has revealed her bid to win is being backed by Liam Payne and his newborn son baby Bear.

The 26-year-old star is flying the flag for the UK at the annual pop extravaganza and will sing her track 'Never Give Up on You' at the live final in Kiev, Ukraine, on Saturday May 13.

Lucie has been blown away by the support she has received from the British public and her famous friends since she was chosen as the country's representative with everyone eight behind her.

But was especially shocked when she bumped into Liam - who has just welcomed Bear into the world with his girlfriend Cheryl - at a radio studio whilst on the promotional trail and he told her he was right behind her.

Speaking exclusively to 888sport, Lucie - who was judged by Cheryl when she made it to the live 'X Factor' finals in 2009 - said: ''I bumped into Liam Payne the other day when we were doing some radio stuff, he wasn't on my year but we all kind of know each other because we're from that world. We had a really great chat about it and he wished me good luck! I was really just saying congratulations to him about little Bear.''

Lucy was desperate to see a photo of the tot but unfortunately for her Liam, 23, never got his phone out for a scroll through his camera roll.

She added: ''I didn't get the honour of seeing any baby photos, we were in the lobby of a radio station so that wasn't going to happen. He seems so happy.''

Lucie has a busy week ahead of her in Kiev, with rehearsing for the final top of her list of priorities.

The brunette beauty is aware that the UK hasn't done to well in the voting in recent years but she believes the other European nations are taking her and her song - which has been co-written by Swedish star Emmelie de Forest, a 'Eurovision' winner in 2013 - ''seriously'' this year.

She said: ''There has been an element of the UK not taking 'Eurovision' seriously over the years but I think this year the Europeans are really taking us seriously and that's so refreshing. I know I'm a part of it so I'm slightly bias but it does feel different this year.''

Go to 888sport.com to read the full interview with Lucie Jones ahead of the 'Eurovision Song Contest'.