'The Crown' star Emma Corrin has teamed up with Kim Basinger and Chloe Sevigny for Miu Miu's Christmas campaign. 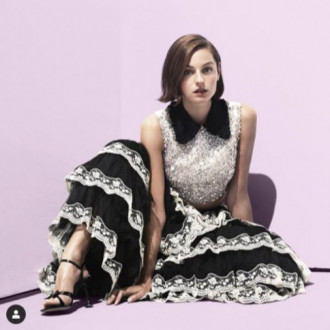 ‘The Crown’ star has teamed up with the fashion brand alongside famous faces Kim Basinger, Chloe Sevigny, Du Juan and Raffey Cassidy, Jordan Kristine Seamón and Storm Reid to represent the idea of the “icon”.

Announcing the campaign, the Italian women's fashion brand said in a statement : “Each adds a depth and richness to the Miu Miu universe. A cast comprising actors and performers is inherently keyed to the meaning of Miu Miu – of transformation, of reinvention, of a woman who can be women.”

The campaign features the talents of established and emerging stars pictured in the brand’s pre-spring 2021 collection photographed by Mert Alas and Marcus Piggott, with creative direction by Katie Grand.

It continues the long-standing relationship between Miu Miu and ‘50 Shades Darker’ star Kim Basinger, who has starred in multiple campaigns for the Italian fashion house.

Likewise, Chloe Sevigny has been featured in Miu Miu campaigns since 1996 when she was just 22 years old.

The campaign captures the star’s feminine strength with notions of girlhood as the women pose in pastel hues and crystal-adorned clothes featuring vintage-inspired frills and bold patterns.

Meanwhile, Emma - who plays Princess Diana in ‘The Crown’ - has learned some styling tips from the late royal and used her iconic fashion sense to help her navigate her way through the series.

She said: “Having her fashion to hold onto was such a powerful tool during filming. When I would film a scene from episode three and episode nine in the same day, if I had one of those famous suits to put on, I’d know: ‘Okay, I’m in this phase for Diana.’ Clothes make such a difference to how you hold yourself and where you are mentally. It speaks to the power of fashion.”