WWE Superstar R-Truth is releasing an album of his own material and has revealed his influences are rappers like Eminem, Tupac Shakur and Lil Wayne. 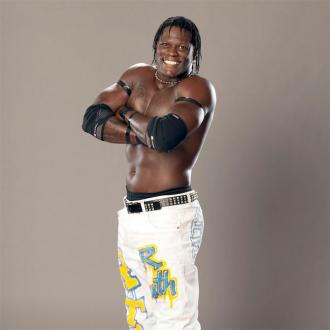 R-Truth is releasing an album inspired by Eminem and Tupac Shakur.

The WWE Superstar has for years performed his own theme song on his way to the ring and now he is recording an LP of his own material.

R-Truth is a huge fan of the two rappers' music as well as other hip-hop stars such as Lil Wayne because their lyrics are personal and that's what he wants his music to be like.

The 'RAW' star exclusively told BANG Showbiz: ''I'm currently working on a WWE album made up of all my own songs. I have a wide range of artists I listen to - I can get something out of Pearl Jam! Talking about rap I'm into Tupac, Eminem, Lil Wayne and T.I. Those guys, to me, talk about their own personal experiences.

''There's a lot of my life in the songs - I lost my sister to cancer around four months ago, there's a song on there about that. People who have gone through that, or are going through that situation will hopefully take something from it. A lot of my music is inspired by personal situations in my life.''

R-Truth, 41, will be joined on the record by World Heavyweight Champion John Cena - who has previously recorded his own album - and he is very excited for the fans to hear their collaborations.

He added: ''John Cena just recorded two songs. They should be really great once they're done. I've always wanted to do this and I was talking to Hunter (Triple H) and he was like, 'I just can't believe you've not done this already.' I've been on and off with WWE about 10 years and I'm just at the point now where I think I've matured enough to put out something that's likeable. Me, I like to go against the grain I don't like to talk about typical things in my music - my music is more about real life situations. About important things, having faith, pursuing your dreams and goals. My music is about drive.''

R-Truth and many other WWE Superstars are currently on tour in the UK and he admits he loves coming to Britain because everyone in the company raises their game.

He said: ''I love it man, the atmosphere changes, the morale changes in the locker room. I think a lot of the guys - even though we have a demanding schedule - just get so excited to come over here, morale is high.''

WWE will be touring the UK again in May 2014, with tickets going on sale November 18.