Fans, who lined up 12 hours earlier, definitely got their time's worth in Elton John's set.

Bonnaroo festival ended on a high note yesterday, with Elton John as the final performer – but not before fans had been queuing up for over 12 hours to see the Brit perform. But even before he took the stage for his first ever American festival performance, there was plenty to see and hear in the supporting acts. 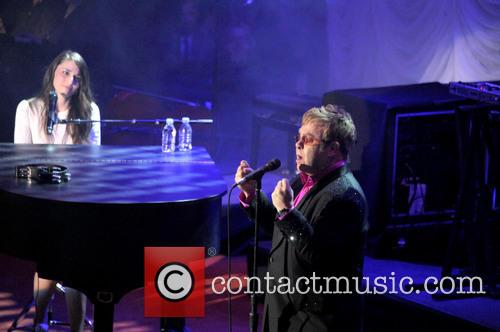 One of the most anticipated gigs at Bonnaroo was the Arctic Monkeys’ set. Late in the swealtering afternoon, they opened with their festival sing-along Do I Wanna Know?, which funnily enough echoed Sam Smith’s cover on Friday night. The festival crowd was loving it though, with one woman reportedly taking to mattress-surfing during their set.

Just after 8PM, Wiz Khalifa took over Bonnaroo’s Which Stage to “Bout Me” sans Problem and Iamsu!, rocking a big-brimmed hat. He may have taken a cue from Pharrell there. And for the Miley Cyrus fans out there, he even performed 23, featuring Miley’s voice. Just a snippet from Khalifa’s mid-set inspirational speech: “Your generation inspires camaraderie and passion and the world is gonna be alright because we’re using our minds to move things forward.” Good times. Wiz Khalifa interrupted his set for a little inspirational moment.

Elton John finally opened his set at about 9.30PM, with a classic three-song punch Funeral For a Friend/Love Lies Bleeding, Candle in the Wind and Bennie and the Jets. It was a gig worth waiting for (per fan reviews on Twitter). Ben Folds almost outplayed the Brit on a duet of Great Seal. John even dedicated a performance of Don’t Let the Sun Go Down on Me to radio legend Casey Kasem, who died earlier in the day at the age of 82.

Elton John just delivered one of the most inspiring sets I've ever seen @Bonnaroo. Incredible performance. Perfect way to end the festival.

Had a blast with the Rocket Man #EltonJohn tonight! A true music legend! #bonnaroo also thanks to… http://t.co/SiyH5fFgoY

First he wins an NBA title and now Popovich is on drums for Elton John at Bonnaroo. What a night. pic.twitter.com/HN8RdFFcrA