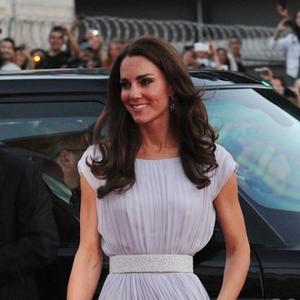 The royal - who wore a stunning Sarah Burton for Alexander McQueen wedding gown when she married Prince William on April 29 - was chosen for her mixture of designer fashion and high street clothes, beating off competition from Florence Welch, Andrea Riseborough, Tilda Swinton, and Keira Knightley.

Harper's Bazaar editor, Lucy Yeomans, said of Catherine's wedding dress: "She gave us the year's - if not the century's - most thrilling fashion moment."

The judging panel which included Lucy, editor-at-large Kim Hersov and designers Antonio Berardi Roksanda Ilincic and milliner Philip Treacy, selected 20 women who continue to represent British style that is both elegant and unpredictable.

The panel described the 29-year-old duchess' style as an "incredible style Evolution that has gripped us all".

Catherine was recently named one of the best dressed women in the world, making it onto People magazine's annual list in seventh place.

The magazine said: "Newlywed Catherine, Duchess of Cambridge, knows just how to impress her adoring public, whether the occasion calls for recycling her popular Reiss dress or by paying homage to Canada in a lace look by native designer Erdem Moralioglu.

"From her wedding day to her North American tour, the newly minted princess earns her place as fashion royalty."

Fashion columnist and author Hadley Freeman said: "[Catherine] is about style rather than fashion."