9) Temples - Sun Structures
Having spent the best part of two years touring the songs that would eventually go onto become 'Sun Structures', it was perhaps somewhat inevitable that the album would be every bit as good as we'd hoped. What happens next will be key to Temples long-term future, but for now 'Sun Structures' is a fitting document of the band's inaugural stages.

7) Manic Street Preachers - Futurology
"We've done the best we can," implores the title track, and it's impossible to disagree. If anything, 'Futurology' represents their finest body of work since 2009's 'Journal For Plague Lovers' and isn't so much a return to form, but more a reminder of James Dean Bradfield and co.'s continual relevance over twenty years after their first release.

6) Cloud Nothings - Here And Nowhere Else
Having relocated to Paris and lost the services of his lead guitarist in the process, Cloud Nothings main man Dylan Baldi went back to basics to create arguably his most potent collection of songs to date. With John Congleton replacing Steve Albini on production duties, 'Here And Nowhere Else' is a voyage of rediscovery but one that firmly cements its creator amongst the finest songwriters of his generation.

5) The Twilight Sad - Nobody Wants Be Here And Nobody Wants To Leave
Sometimes, the process of re-evaluation can be a healthy one. Take The Twilight Sad for example. Unsure of what the future held after critically acclaimed but largely ignored third album 'No One Can Ever Know', they took stock of their lot, went back to basics in terms of how they approached writing songs, shut themselves away for three weeks and came back with their strongest body of work since 2007's debut 'Fourteen Autumns And Fifteen Winters'.

4) The War On Drugs - Lost In The Dream
Line-up changes aplenty, accusations of ripping off Bruce Springsteen and Rod Stewart, spats with Mark Kozelek. The War On Drugs' Adam Granduciel had it all from the time his band's third long player 'Lost In The Dream' started fruition up to the present day. Nevertheless the results were astounding. This sprawling rock opus is up there with The National's 'High Violet' and Interpol's 'Turn On The Bright Lights' as one of the American underground's finest guitar records this side of the millennium. Hangar-sized arenas beckon.

3) Interpol - El Pintor
Hands up if you were one of those that thought Interpol's days as a serious creative force were long gone? If 2010's self-titled fourth album heralded a low point in the band's career then this year's 'El Pintor' suggests the creative juices have been well and truly replenished. Now effectively a three-piece, the songwriting hub of Paul Banks and Daniel Kessler have come back with a record which suggests their best work may yet to be unleashed.

2) Alvvays - Alvvays
Every year, a song seeps into the synapses and refuses to leave, sometimes decades after. In 2015 that song would be 'Archie Marry Me' by Canadian five-piece Alvvays. While similarities with Camera Obscura and The Concretes were hard to ignore, it was the effortless, laissez-faire and ultimately seductive vocal performance of Molly Rankin that proved to be the catalyst. What's more, their self-titled debut is packed with songs equally as good as the aforementioned 'Archie.'. With a UK tour already scheduled for the latter part of January, 2015 promises to be an even bigger year for Alvvays. For now, this serves as an essential introduction.

1) Eagulls - Eagulls
Whatever they've been putting in the Leeds water in recent years, it's certainly paid dividends if the music produced within that city is anything to go by. Following on from their appearance on the David Letterman Show at the start of the year, Eagulls released their eagerly anticipated debut and boy, was it worth the wait. Guitars reminiscent of Killing Joke or My Bloody Valentine at their most transient collide with George Mitchell's socially aware commentaries. With no filler from start to finish - each and every one of 'Eagulls' ten pieces could have been a single in its own right - it's the undisputed album of 2015. 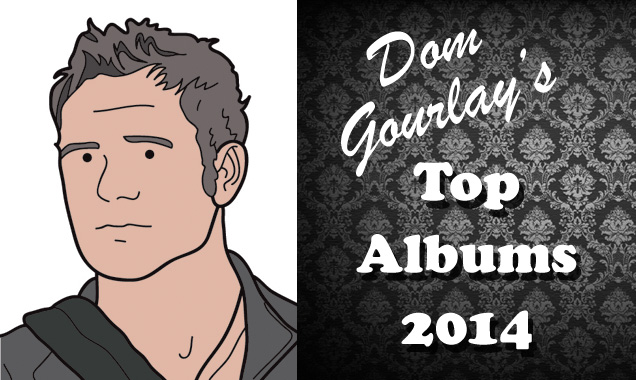