Designer Daniel W Fletcher: Harry Styles had a huge impact on my career 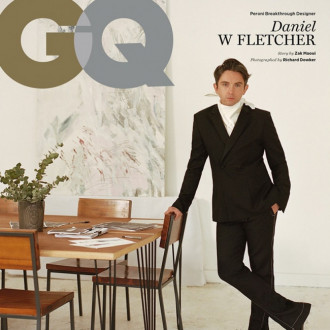 Daniel W Fletcher says he owes a lot of his success to Harry Styles.

The 30-year-old fashion designer - who runs his eponymous brand Daniel w. Fletcher - was contacted by the 'Golden' singer's stylist, Harry Lambert, in 2015, asking to buy all of his boxy shirts from his graduate collection.

And, Daniel - who was crowned Breakthrough Designer at the GQ Men of the Year Awards on Thursday night (26.11.20) - admitted he wouldn't be where he is now without the support of the One Direction star.

Speaking to GQ magazine, he said: “Harry had a huge impact on my career. At 24 years old I couldn’t believe what was happening.”

Daniel - whose clients also include pop stars Sam Smith and Troye Sivan - and Harry, who recently rocked a dress in Vogue, share a passion for blurring the lines between gender and fashion.

‘13 Reasons Why’ star Tommy Dorfman said of Daniel’s latest collection: "There’s a soft femininity about the clothes that aligns with my spirit – that sharp tailoring and those cinched waists in his AW20 collection.

"It’s a point reiterated by model Jack Guinness: "He’s a truly modern designer in his approach to fabric and cut, creating feminine menswear for all genders. There’s a subtle strength in the vulnerability of his work. I love wearing [his designs] on the red carpet or to a gay dive bar.”

However, before studying fashion, Daniel - who also attended Kingston University - was planning on becoming an actor.

He recalled: “I always wanted to be an actor.

“It wasn’t until I enrolled on an art foundation course at Kingston University at 18 that I decided I wanted to make clothes. Growing up in a small town in Cheshire, I didn’t think it was a viable career."

The GQ Men of the Year Awards also awarded the Design Lead accolade to Tommy Hilfiger.