Ahead of the imminent release of his second full length solo record  - Dekker, aka Brookln Dekker, took time out to let us know about the musical project he started back in 2019. 'I Won’t Be Your Foe', set for release on 20th May 2022 via Useful Fictions/Wagram Music is Dekker's follow up to his debut solo album - 'Slow Reveal: Chapter One'. Released in November of 2020, 'Slow Reveal' was Dekker's second album as he had previously collaborated on 'We Share Phenomena' in 2018 with Berlin based pianist Lambert. His latest album, "oozing with rich textures" showcases the American singer-songwriter's "beautifully honeyed vocal" against a backdrop of rhythmic folk scores. Dekker says that 'I Won't Be Your Foe' - "was written and recorded entirely during the pandemic. I didn’t want to make a small sounding introspective album as that was the easy route in such weird times. Rather, I wanted to make a record that sounded more like the world I wished I were in at the time; a little more upbeat and colourful". With less than a month to go before it's release we caught up with the Nottingham based artist to find out a little more. 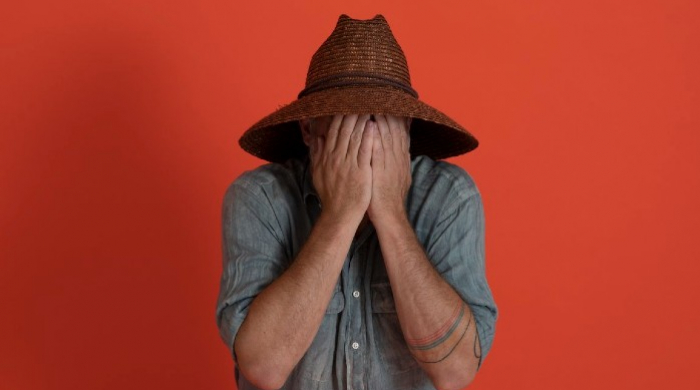 I write honest folk songs with a touch of pop and sometimes soulful vocals. Usually led by an acoustic guitar but I’m drawn to rhythm as much as melody so I reckon it’s not run-of-the-mill singer-songwriter stuff.

I began my journey as Dekker in the second half of 2019, so to be frank, pretty much everything has been challenging but if I had to pick a particular challenge it would be trying to place Dekker in the actual world for people. I’ve had some success with playlists but haven’t managed to connect with that listening audience in the way I’d have liked to yet. The hat makes it a little more difficult to connect with people in a direct way, since no one can see my eyes, and the pandemic has made it difficult to get out and about in a way that I think would ground and connect me. I'm optimistic the upcoming tour will assist in this.

I wouldn’t know how to answer this exactly. I’m having a great time and have managed to catch a few little breaks here and there. As humans, we all suffer, as an emotional, creative-type it’s easy to wallow but I’d rather focus on the positive things and remain facing forward.

While I have let a few more people into the mix, especially my drummer and collaborator Stefan Wittich, there is no other way than for me to have creative control really. It’s my name after all. ;) But yeah, seriously, creative control is pretty important to me with Dekker as I began this journey as a very real place to investigate and become as an individual. So, even though I have let the odd voice in, I am quite protective of Dekker as at the end of the day there is a therapeutic element to this for me. Saying that, this project has benefited greatly from some of the feedback I’ve incorporated. It’s a dance, isn’t it?

I’m not sure I have a satisfying answer to this. I’m not one of those who has a particular musical influence I could point to. I do reference other music occasionally but that’s when I lack the words to convey (or even understand myself) a particular vibe I feel the song drawing me to. In terms of lyrical content, I write in a stream of consciousness kind of way. Songs usually form quickly and permanently with very little editing after the inspired moment. I think you’ll find that all of my songs have an intimate and personal feel to them - that’s real, not manufactured or over thought.

Hmm, tricky.. I did a collaborative album with the pianist Lambert a few years ago and that was exhilarating. He was/is a friend, so it wasn’t working like with a stranger and I have the feeling that it might be weird to write with a stranger, I don’t know, maybe I should actually try this sometime.. I could imagine writing with an imaginative instrumentalist like Jose Gonzales, maybe.?

Ideally I’ll be deep into making LP3 and when we go out with that record I’d like to be playing for 200+ people everywhere we play in Europe, I’d also like to have made more headway in the UK and USA as well..