Her debut album The Witching Hour is out soon.

Ahead of her headline show in London this month, up-and-coming pop songstress Dani Sylvia talks to us about her journey making music so far. She released her latest single Lithium in September, and she's set to drop her album The Witching Hour soon on Little Misery Records. 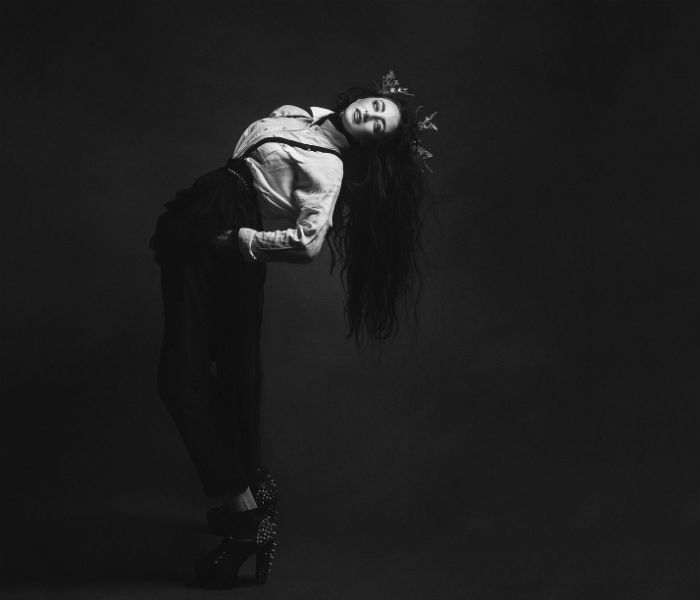 I'd describe my sound as 'miserable pop', but to be more specific I think I'd say sonically it's pretty varied, as I'm keen to be as genre-less as possible. The lyrics are very storytelling and often helped by an upfront and clear vocal. I love dirty bass-lines, soaring melodies, massive drums and soulful, theatrical vocal performances. I'd say the sound is hopeful, ethereal and celestial.

I have faced many many challenges in the music industry so far. I have definitely experienced a lot of misogyny, abuse of power and mind games from individuals I have worked with. It's really important to surround yourself with a team of people who really believe in what you do, understand your vision and who care about your well-being. I've also experienced a hilarious amount of let downs and a barrel full of rejections, however I am grateful for each and every one of them as they taught me so many valuable lessons, have thickened my skin and have galvanised my drive to keep going. Every time I thought I was losing something I was actually being re-directed to something a million times better than what I thought I wanted.

I think it is very difficult and that people are under the illusion that it happens quickly. It doesn't always work that way. If you have an unshakeable belief and desire for your message to be heard, I think it's just a case of persistence and honing your skill. It's also important not to lose sight of the WHY. If the desire is only to 'make a name for yourself' for the sake of it I think this will potentially induce a lot of dissatisfaction once that has been achieved. It's important to stay true to why it is you want to do this; I think for most songwriters this mainly includes moving people, making people think, making them dance/escape, empowering them, helping them grieve and giving people hope in their darkest hour.

It is extremely important. In fact, the alternative isn't an option for me.

I draw a lot of inspiration from other music, from country to pop to metal. However, I'd say my main inspiration comes from the humans I encounter; those who I adore, who make me want to be a better person and those who hurt me. I also love writing about friends' predicaments. For example, I have a single coming out next year called 'Zachariah' which is about my friend getting far to attached too soon to a guy he met on a dating app. I essentially just use my songs to divulge all my friends' secrets.

It's a toss up between The 1975 and Frank Ocean, simply because I love their work so much it actually hurts a little bit. I'm a full fangirl.

I used to play golf for West Sussex. I also have three kittens whom I love more than most humans. No idea why I'm single.

I do have some big, cliched ambitions which I won't bore you with, but mainly I want my music to be a lifeline for somebody somewhere. Ultimately I'd love to cultivate a fan base who relate to the words I write and who love listening to it because it makes them feel hopeful, understood or simply makes them want to two-step.

This time next year I hope to have increased my fan base and to have just released my debut album 'The Witching Hour' (which I hope reaches a lot of people). In between now and then I hope to continue to work extremely hard to keep progressing and creating work that I love. I also hope I feel happy and content and that I remember to take my music seriously but never myself.

Over the next few weeks you should expect me to keep banging on about my single 'Lithium', a London headline show on November 23rd and next year, expect LOTS OF MUSIC!