Naturally, rock musicians gravitate to rock-themed jewelry including skull rings, cross pendants, and showstopper leather bracelets. However, the items radiating the rocker and biker vibe are sought after not only among the rock n roll enthusiasts but also pop stars. Let's take a look at these celebs who can't imagine their lives without bad to the bone skull jewelry. 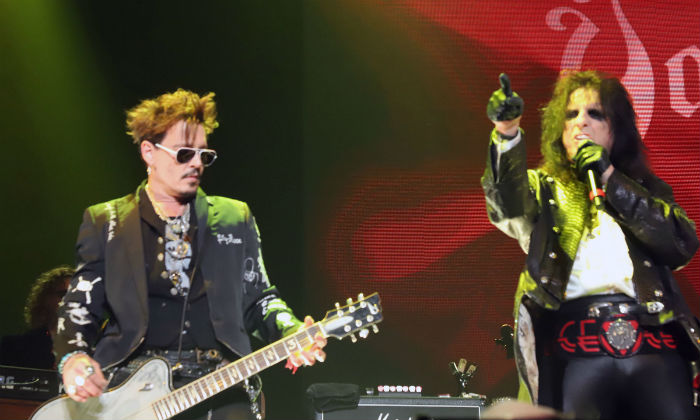 Did you know that our favorite pirate is also a talented musician? You can hear him playing guitar in the movie Chocolate. For Once Upon a Time in Mexico, not only did he give us an incredible performance but also took part in creating the soundtrack. Johnny Depp is a good friend of some iconic musicians, with many of which he collaborated throughout his music career. For instance, Gibby Haynes (Butthole Surfers' lead singer), Flea (Red Hot Chili Peppers' bass guitarist), and Steve Jones (the member of Sex Pistols and the Professionals) became his bandmates for the alternative rock band P. Currently, Depp is a part of the Hollywood Vampires band, which he founded together with Joe Perry and Alice Cooper. Long story short, Johnny Depp has every right to be on our music celebrity list.

So, if you are aware of who Johnny Depp is, you can surely recognize his style bristling with 'biker' jewelry. Skull silver rings, audacious necklaces, and leather bracelets are part and parcel of his everyday look outside the set. He is an owner of an impressive skull ring collection including a skull-adorned wedding band and the famous "Keith" ring by Dead Ringers. It is not known for sure whether the actor picked this men's skull ring because of Keith Richards, his close friend, or he is just among thousands of people who fell victims of the ring's irresistible magnetism, but the fact is that Johnny Depp can often be seen flaunting this bold accessory.

Very few people can boast that fashionable jewelry or accessories are named after them. Keith Richards is from the cohort of those lucky ones who had the honor of perpetuating their name in the history of fashion. The musician didn't even have to try his hand in designing as today's superstars do. The fact is that he is a model for a stunning sterling silver skull ring. He hasn't been parted from it for 40 years. The image of the Rolling Stones guitarist can no longer be imagined without this accessory. The iconic rock n roll skull ring even received the name of its wearer and became known as Keith Richards skull ring.

The musician became the owner of this massive silver ring in 1979 on his birthday party. It was presented by the ring's creators, famous English jewelers David Courts and Bill Hackett. It is noteworthy that at the exact same party Richards met his future wife. They have been inseparable since that very day. Who knows, maybe silver skull rings really have the magical properties as they say.

Keith Richards has probably infected his brothers in trade with a love for original jewelry. Ron Wood, another Rolling Stones legend, confirms that there could never be enough of good jewelry. His body ornaments are as audacious and commendable as the music coming from under his fingers. Raven skull pendant featuring silver beak and black head completed with a black bead necklace and alongside contrasting silver charms on his neck create an ass-kicker duo.

The world's most famous bearded man and concurrently the founder and frontman of ZZ Top also loves skull jewelry. His vast jewelry collection includes items of both well-known brands and custom products. Interestingly, the musician likes complementing his rings with BFG 8 engraving, where BFG is his initials (Billy Frederick Gibbons) and 8 is his lucky number.

Another rock n roll legend who is crazy about rocker jewelry is Steven Tyler. You can often see him without a shirt on Aerosmith performances, but you will never see him without a ton of jewelry that adorns every suitable part of his body. Like every self-respecting superstar, the Aerosmith frontman leaves his mark on everything he touches, including his trinkets. His skull rings, for instance, carry a gold-plated stamp "Steve" so that everyone knows who they belong to.

Zac Brown, the leader of the eponymous band, is known not only as one of the most influential country musicians but also as a bold look enthusiast. The innate fedora hat, beard, tattoos, and, of course, rocker jewelry are the staplers of his style. The pieces that caught our eye in particular are his raven necklace and daring skull bracelets. Hands down, Zack is one of the most stylish country musicians ever. And how else could it be if his wife Shelley is a popular jewelry designer.

A buff of dark outfits, black eyeliner, sunglasses, and badass jewelry, Alice Cooper had no chance to escape our fashion list. Known as a fan of shocking stage accessories (such as his double belt with a skull buckle worn with a whimsical striped suit), the revered musician does not abandon outrageous jewelry even away from spotlights. When his hands are not wrapped in black gloves, you can see the Jimbo skull ring on his finger as an homage to Jim Morrison.

Just like Steven Tyler, Billy Idol marks jewelry items that are dear to his heart. The inner side of his numerous custom skull rings carries Billy stamp. We don't know for sure how many items the rock legend has, but he can definitely manage to show off three of his skull rings on the same hand.

Not only rock veterans revere skull rings and rocker jewelry on a whole but also many pop stars add them to their wardrobe. Rita Ora, for instance, is a big fan of skull items. She has been spotted rocking skull rings and bangles, and her crazy monochrome skull dress, jacket, and boots outfit became a real sensation on the Internet. Another pop star that breathes and bleeds for quirky attires is Katy Perry. She loves adding bold accents to her ensembles as she did for the Grammy's award when skull dangles tried to distract attention from her sheer top.