Scottish four-piece Dictator (not Dominators, as some would have you believe) recently dropped their epic new single 'Anthem For A Doomed Youth', and we caught up with them recently to find out more about their sound. I think we'll be hearing a lot more of them in the coming months... 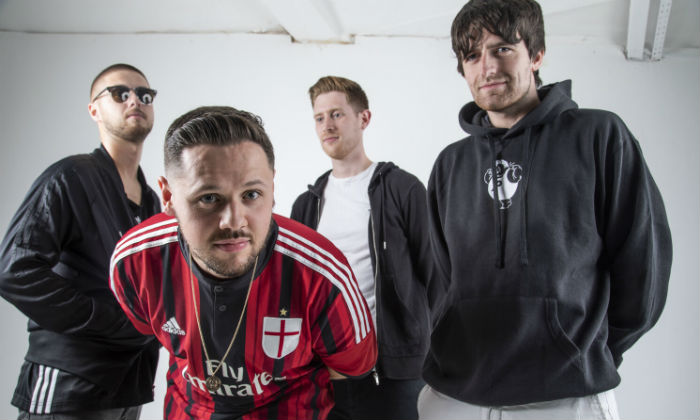 If Pink Floyd and Gorillaz met to have a handsome Scottish love child.

It's a struggle to wrap your head around the new digital world we're in, I think it's a good thing though, we've more music at our fingertips than ever before! I guess the only big hurdle is how do you stand out in a crowd of 2 million talented people. The days of sending a CD to a record label with your fingers crossed are well in the past!

What a segue that last answer was, it's hugely difficult to stand out. Be yourself, write music you like, not what you think other people like and you might be in with half a chance. Even if no one likes the music at the end of the day you've created something you're proud of and it's hard to put a price on that.

Massively important. There's a difference between creative control and collaborating, we're all for working with people but as soon as you start drifting away from who you are and what you've set out to achieve then you're treading dangerous territory.

Every day life, in all honesty it's in the mundane tasks we do that you normally find your best piece of inspiration. Our latest track "Anthem For A Doomed Youth" is quite politically charged and it's based on the frustrations that come from growing up and realising how devoid of integrity the world of politics actually is but that crucial bit of inspiration came from watching a 30 second news segment on how knife crime London has nothing to do with the way the government treats the communities which is ridiculous. It's in those quick flashes you get some form of inspiration and before you know it you're sitting with a fully fledged track where you've managed to capture how something's made you feel into something you can listen to.

Chance the Rapper. Him and his manager Pat Corcoran are reimagining the music business but it's sometimes forgotten about how unbelievably talented he is as an artist. We're massive hip hop fans and we're constantly trying to dabble in that world but in truth we're all just truly terrible rappers, there's no sense in even pretending. Being able to work with a lyricist as talented as Chance would be the dream.

We recently got introduced at a festival as "Dominators" it was on the poster and everything, I'm pretty sure people were expecting a tight leather clad German metal band (which I've a lot of time for) and out we came with our indie synth music and skater jumpers, tough crowd. We dabbled changing the name to that if you're wondering but I couldn't find the right leather suit.

Billionaires? Nah look we just want to be as successful as we can possibly be without taking ourselves to seriously, we're out here putting our all into this and at the end of the day our aims are to get to a point that we look back and recognise we gave it our best possible shot in this moment no matter what happens. Obviously every artist wants to make money from music so that we can continue to produce it, we're proud of what we create and we hope people get a sense of that through the tunes.

Well hopefully we've a few headline gigs near you and you can come along and see us! We'll have released a few more singles by then and perhaps blagged our way to playing a festival or two all going well, if we read back on this in a years time and think we've done ourselves justice then job done.

Time to get plugging. Our next single "Anthem For A Doomed Youth" is available on all major music streaming sites, give it a listen and see what you think. If you love it, come along to our shows and we'll buy you a drink. If you hate it come along to our show anyway and give us a heckle, can't be worse than the Dominator gig, we'll probably still buy you a drink. We're hopefully going to have a load of new music to bring you as well in the coming months so keep an eye out for us, you'll no doubt be sick of us by the summer!!