Castells talk to us about being in rival bands, their first headline show and a possible future collaboration with Sigrid [EXCLUSIVE]

Prior to their headline show at The Grace in Islington, and a forthcoming EP release, Castells take time out to share their plans.

After releasing their first single of 2021, Falling For You, Kent based band Castells are excited to be sharing a new EP, Viola, on May 5th. The latest release from the promising four piece band contains an as yet unreleased track, Peaches, and comes just one month ahead of their first headline gig at The Grace, in Islington. The Sidcup quartet had to put their previous plans on hold due to CoVID19 but are now gearing up for a mini tour and plenty more releases as lockdown restrictions begin to ease. Having already received strong support from BBC Introducing's Abbie McCarthy, Castell's new EP, and subsequent headline show, should see their star rise still further. Before the busy schedule kicks in we caught up with them to find out a little more about them. 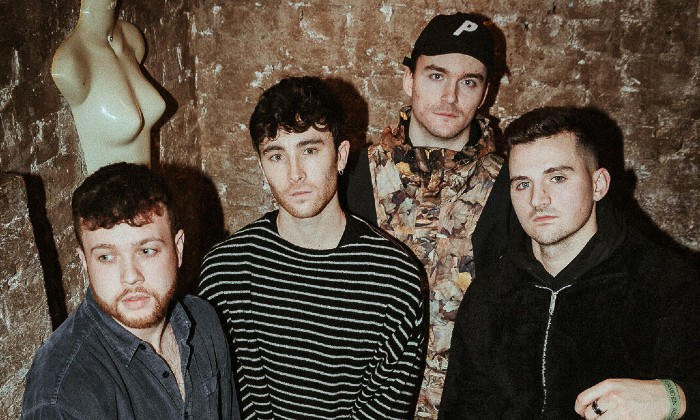 We believe our music is very diverse so it is hard to put one genre on our sound. We have some songs which are on the heavier Alt Rock side of things similar to bands like Nothing But Thieves, The Hunna and YUNGBLUD and others which are straight up pop music like LANY, Khalid and Nightly. We all have very different music tastes so I guess Castells sound is a mashup of it all. Pop music dressed up as Indie/Rock is probably how I would describe our sound to a new fan.

It's a bit of an obvious answer but I think COVID-19 has to be our biggest challenge as a band so far. Throughout 2019 we had played some very successful support shows at good venues, packing them all out and creating a bit of a buzz around us. We wanted to use this momentum and put on our first headline show in February 2020. We already had it all planned out and many tickets sold but of course we had to cancel the show. It felt like a bit of a kick in the teeth because we had worked so hard behind the scenes as well as working hard playing live shows for around a year building up to the headline itself. We also had some studio sessions booked in to record future singles but that also had to be put on hold. We're very lucky we could stay in contact with our fans via social media as well as put out new music despite not playing live shows. We have rearranged the gig for September this year so fingers crossed it can all go ahead.

It is hard to make a name for yourself in this career but we knew that when we signed up for it. We've done our fair share of playing shows to 6 people, travelling far in cramped cars, spending all of our money replacing broken instruments but that is all part of the journey. I think the struggles at the beginning are the times you learn the most.

We have always been a DIY band and we hope we always will be. It's important to us to have creative control because then it makes it true to us and where we're all at at that time of our lives. Plus the more work you put into your art the more rewarding it is if others enjoy it too.

I think you can draw influence from everything. Most of our lyrics are based off of true events which happened to us so those songs came very natural. The weather is a big influence on us as well. Typically if the sun is out the songs will be happier and more upbeat. Whereas the winter days force us to lean more towards the darker more vulnerable Castells sound.

If you could collaborate with anyone going forward who would you choose and why?

We would love to collaborate with someone like Sigrid. We all have a love for pop music and great melodies and there's not many better than Sigrid. We all went to see her back in 2019 and left that show with every song stuck in our heads so she must be doing something right. I think a Castells & Sigrid combo would be everyone's style.

A random funny fact about us is that when we were younger we were in rival bands. Connor (vocalist) and Marc (drummer) were in one band. Then Rob (guitarist) and Matt (Bassist) were in another. Because we're all from a pretty small town with not a lot of musicians it was only natural that a somewhat 'friendly' rivalry was born. So Castells is kind of a supergroup if you ask us.

Our short term goal is to keep releasing new music every few months and sell out our headline show in September. The long term goal is to be successful enough we get to play arenas and keep releasing albums when we choose. We like to think the sky's the limit for Castells so we're working extra hard now to reach it.

This time next year we hope to be playing shows promoting our second EP. Not playing a show for over a year has caused us to miss it so much so the thought of going on a mini tour excites us a lot.

The plan for the next few months is just to keep releasing new music. Our debut EP comes out in May so all of our focus is on that at the moment. Behind the scenes we will be constantly writing new material so we will never have a dry patch. Once it is safe we will begin rehearsals for our headline show in September. We cannot wait to see what the next few months hold for us!