By The Sea festival returns to Margate at the end of September for its third year. Over the course of three days alongside the heritage rides, candy floss stalls, 2p slots and just a stones throw from the golden sands, By The Sea will feature a plethora of bands in some iconic settings. 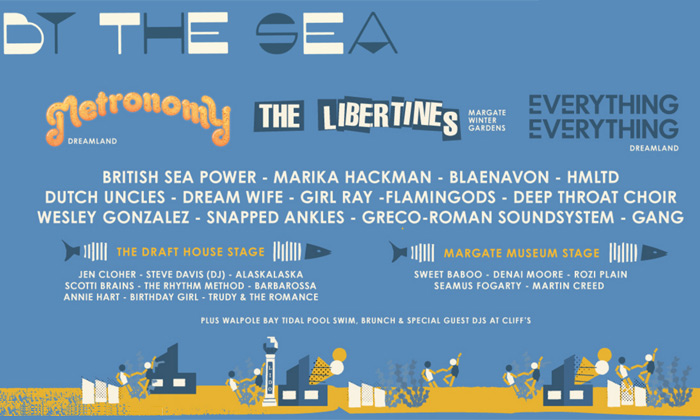 Having previously played host to Super Furry Animals, Hot Chip, Wolf Alice, Bat For Lashes, Mystery Jets and Foals, amongst others, By The Sea has attracted a finely balanced and eclectic mix of inspirational artists. 2017's bill is just as tempting and looks set to delight and excite in equal measure. The variety of acts is a diverse selection of the up and coming as well as some established, unmissable favourites.

By The Sea this year once again features its own fringe festival as well as the inclusion of some more of Margate's best loved venues. Taking in the UK's oldest theme park, Dreamland, through to the Margate Museum Stage and The Winter Gardens, Everything Everything, Metronomy and The Libertines headline this years hotly anticipated festival. With support acts featuring Marika Hackman, Sweet Baboo, Girl Ray, Dutch Uncles and especially Blaenavon and British Sea Power the roll call of artists reads like a wish list.

By The Sea has quickly established itself as Kent's biggest and best festival. With the somewhat sad demise of The Hop Farm and Lounge On The Farm, By The Sea has more than filled a void, cleverly positioning itself at the end of the festival season and acting as a celebratory season finale. Across various stages and in some truly characterful venues the creative mix that By The Sea delivers makes for an intimate and bohemian atmosphere that is hard to resist.